Campus Safety magazine announced the winners of its Director of the Year awards program today at Campus Safety Conference East in Herndon, Va.

The higher education award was presented to Ed Reynolds, who is the chief of police at the University of North Texas, Denton. Robert Wood Johnson Hamilton Director of Security Robert Field was the winner of the healthcare section. There was a tie in the K-12 sector: Tim Knight, who is director of safety and security of the Berkeley County School District in Moncks Corner, S.C., and Mark Clark who is the chief of police of the in Perris, Calif., have both been named winners.

“Campus Safety magazine has been honoring our nation’s school, university and hospital police chiefs, security directors and emergency managers for more than 11 years now, and I continue to be impressed by their dedication, professionalism and creativity,” said CS Editor-in-Chief Robin Hattersley at the awards ceremony, which was held at the kick-off of Campus Safety Conference East. “This year’s finalists are, once again, outstanding and continue to raise the bar in the campus security, public safety and emergency management profession.”

The entries were judged by a distinguished panel of healthcare, higher education and school security,  public safety and emergency management experts, including security consultant Thomas Komola, Steve Nibbelink of Vector Security, Gary Sigrist Jr. of Safeguard Risk Solutions, Stan Skipworth of the Claremont University Consortium, Gerald Summers of Integrity Security Protection, Lisa Terry of U.S. Security Associates and CS’ very own Zach Winn. Campus Safety wishes to thank all of our judges for taking time out of their busy schedules to evaluate the program entries.

All four winners of this year’s Director of the Year program will be featured in the October and November/December issues of Campus Safety magazine as well as online at CampusSafetyMagazine.com.

Congratulations to all of our winners! 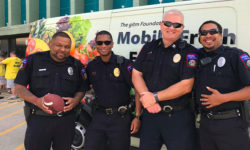