Broward County prosecutors released a police interview with a Stoneman Douglas security monitor who was the first to see the gunman and is being criticized for not issuing a “Code Red”.

Two coaches who served as campus security monitors at Marjory Stoneman Douglas High School have been reassigned and banned from the campus after reports surfaced on how they responded to the Feb. 14 shooting that claimed 17 lives.

Andrew Medina, a baseball coach and unarmed campus monitor, is being criticized for not approaching the gunman and not immediately reporting him to the proper authorities.

David Taylor, also a coach and an unarmed campus monitor, allegedly heard the gunfire and hid in a janitor’s closet, reports The Sun-Sentinel.

“Due to information that has recently appeared in the media and which is being reviewed by the District, Andrew Medina and David Taylor have received administrative reassignments away from Marjory Stoneman Douglas High School until further notice,” Broward Schools spokeswoman Nadine Drew said Wednesday.

The two were also notified Wednesday that they would no longer be allowed on the Stoneman Douglas campus.

Andrew Pollack, whose daughter Meadow was one of the students killed, visited the school on Tuesday to demand Medina’s removal, according to Police One.

“I went up there and took care of it. He’s not going to work there anymore,” said Pollack. “All he had to do was say ‘Code Red.’ He was trained to say those words and he didn’t do it. That’s the incompetency of the Broward School District.”

Medina told police he was riding his golf cart around campus unlocking gates when he saw the would-be gunman. Medina described him as head hung low, wearing a backpack and carrying a duffel bag.

While he couldn’t remember the student’s name, he remembered that he was trouble and referred to him as “crazy boy”. He also described him as the “racist” kid who always wore black or camouflage and had swastikas on his backpack, according to a sworn statement.

“I’m telling you I knew who the kid was,” 39-year-old Medina told investigators. “Because we had a meeting about him last year and we said, ‘If there’s gonna be anybody who’s gonna come to this school and shoot this school up, it’s gonna be that kid.’”

However, Medina did not stop the gunman or confront him. He said he did not think the gunman was armed but that something told him not to approach him and that he relied on his training to report it.

Medina radioed to Taylor after the gunman ran into the building, warning him to “be careful” because a “suspicious kid” was coming.

Taylor saw the gunman go into a stairwell where it would later be discovered that he assembled and loaded his AR-15.

Less than one minute after Medina saw the gunman enter the school building, he says he heard gunshots.

“When [Taylor] was walking halfway down the hallway, he heard the shots and he ran right into a janitor’s closet that was right there,” Medina said. “Like, that’s what we’re — our training is go in, lock in, close all the doors.” 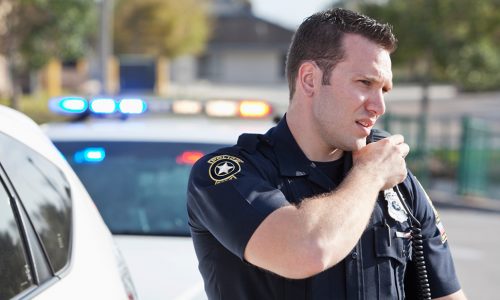 Medina said he considered reporting a “Code Red”, which would have signaled a threat inside the building and kept students behind locked doors, but that he had been trained not to set off a law enforcement response unless he saw a gun or shots fired.

Peterson has also been criticized for not entering the building as surveillance video showed him taking up position outside the school. He has since resigned from the Broward Sheriff’s Office.

“Now I really wish I would have stopped him before and we would have saved all this, but [there] really wasn’t [anything] I could do about that,” Medina said. “I was just doing my job, what they train us to do, you know.”

A campus monitor’s main duty, according to a job description provided by the Broward School District, is to watch for outsiders and find out why they are on campus, keep a log of suspicious activities and patrol school grounds.