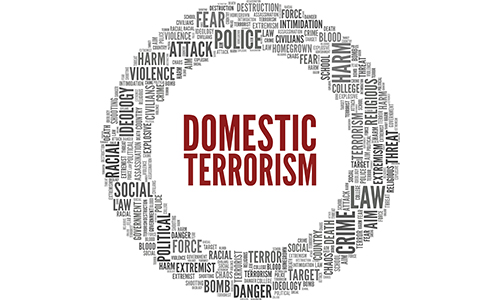 Racially motivated extremists pose the most lethal domestic terrorism threats to the United States and could increase more this year, according to a new report.

The unclassified intelligence report, released Wednesday by the Office of the Director of National Intelligence, reiterates warnings made by U.S. officials, including FBI Direct Christopher Wray, who testified earlier this month that the threat from domestic violent extremism was “metastasizing” across the country, reports The Guardian.

“The IC assesses that domestic violent extremists (DVEs) who are motivated by a range of ideologies and galvanized by recent political and societal events in the United States pose an elevated threat to the Homeland in 2021,” the report summarizes.

The report emphasizes that the most deadly threat comes from racially motivated domestic violent extremists, who officials say are most likely to conduct mass attacks against American civilians, and from militia groups, who are seen as likely to target law enforcement and government officials.

Also on Wednesday, Anti-Defamation League (ADL)’s Center on Extremism (COE) released findings that show the distribution of white supremacist propaganda, including racist, antisemitic and anti-LGBTQ literature, nearly doubled across America in 2020 to 5,125 reported incidents  — an average of 14 per day. 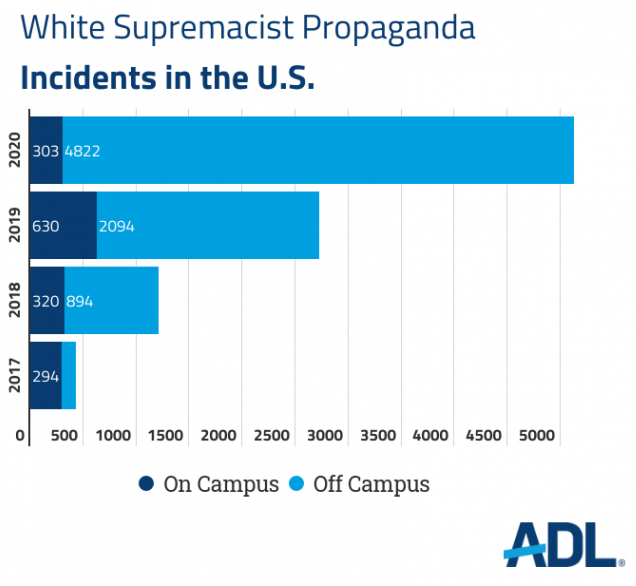 According to ADL, 2020 saw the highest number of propaganda since the group started keeping track. A year-over-year comparison can be seen in the graphic to the right.

The 2020 propaganda appeared in every state except Hawaii, with the highest levels of activity in Texas, Washington, California, New Jersey, New York, Massachusetts, Virginia and Pennsylvania. ADL’S H.E.A.T. Map provides a visual representation detailing incidents by state and nationwide.

Anti-Asian Hate Crimes on the Rise

ADL released its findings just hours after a gunman fatally shot eight people at three Atlanta-area massage parlors and spas. Although law enforcement has not yet categorized the heinous acts as racially motivated or a hate crime, six of the victims were of Asian descent and seven were women.

The shootings occurred in the wake of a new study that found a 149% surge in anti-Asian hate crimes in 2020, according to CBS News. The report, released this week by the Center for the Study of Hate and Extremism at California State University, San Bernardino, is based on police department statistics across major U.S. cities.

The findings reflect a growing trend of discrimination against Asian Americans during the coronavirus pandemic. Looking at hate crimes in 16 of America’s largest cities, the study found the first spikes began last March and April when COVID-19 cases also increased.

Anne Cheng, a comparative race scholar and professor at Princeton University, told CBS News that the coronavirus has given an outlet to already existing anti-Asian American sentiment.

“It’s part of a very long systemic cultural discrimination against Asians in this country,” she said.

Since the beginning of the pandemic, more than 2,800 hate incidents targeting Asian Americans have been reported, and women have been attacked almost 2.5 times more than men, according to the group Stop AAPI Hate.

“Looking forward, we need to also think about what the impact is going to be on schoolchildren [since] 10% of the incidents reported to us involved youth,” she said. “I know parents are very much concerned about what that looks like for their children.”