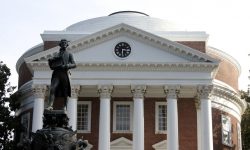 Richard Spencer and 9 Protesters Banned from UVA for 4 Years

Police charge Spencer and nine other protestors for their involvement in the violent riots that broke out during the rally in Charlottesville.

University of Utah Might Bill Students for Controversial Speaker Security

The move to charge for security comes after the school paid $25,000 to protect an event featuring controversial speaker Ben Shapiro.