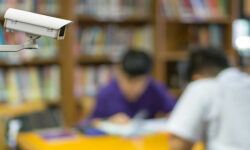 The researchers call their findings “safety tax” — the academic price students pay for the increased security at their schools.