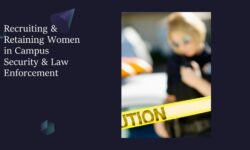 Here’s how your school, university or hospital can hire and then retain more women officers and executives in your security or public safety department.