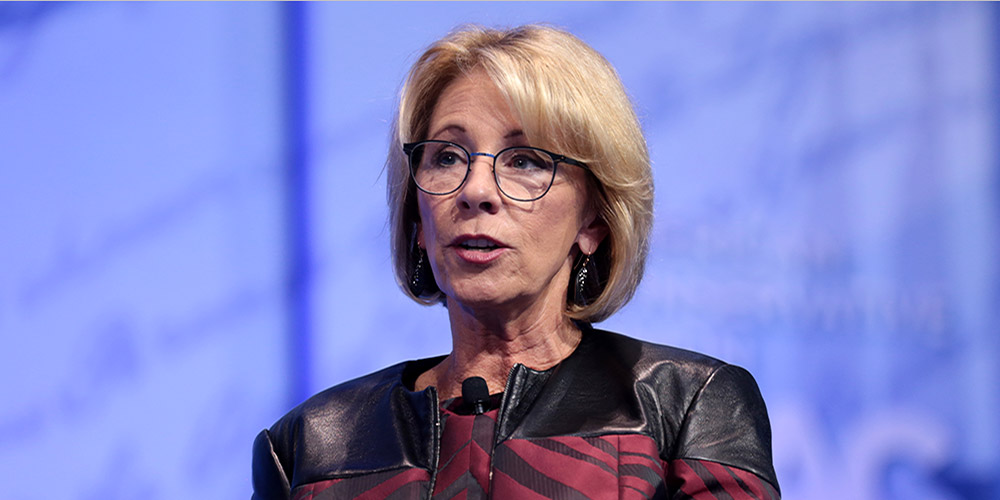 DeVos has said the Obama administration's guidance failed to "strike the right balance" in protecting the rights of both accusers and the accused.

Several advocacy groups for sexual assault victims filed a lawsuit on Thursday against Education Secretary Betsy DeVos and her agency over policy changes regarding investigations into reported sexual assaults on college campuses.

In September, DeVos scrapped Obama-era guidance and replaced it with guidelines that would scale back Title IX investigations by the Office for Civil Rights. The new instructions allow universities to require higher standards of evidence when handling sexual assault complaints.

DeVos said Obama-era directives had “weaponized” the Education Department and were unfairly skewed against those accused of assault.

“Schools must continue to confront these horrific crimes and behaviors head-on,” DeVos said. “There will be no more sweeping them under the rug. But the process also must be fair and impartial, giving everyone more confidence in its outcomes.”

DeVos also said the Obama administration failed to “strike the right balance” in protecting the rights of accusers and the accused, according to The Post-Gazette.

The lawsuit, filed in U.S. District Court for the Northern District of California, alleges the department’s changes discriminate against students who report sexual assault.

The plaintiffs in the lawsuit are SurvJustice in Washington, Equal Rights Advocates in San Francisco and the Victim Rights Law Center in Portland, Oregon. The defendants include the department, DeVos and acting assistant secretary for civil rights Candice Jackson.

The suit also accuses department leaders of being motivated “by their discriminatory – and baseless – gender stereotype that many women and girls lack credibility with regard to sexual harassment.”

Laura Dunn, executive director of SurvJustice, says the Trump administration’s policy changes have deterred students from reporting sexual violence. The reports “definitely dropped,” she said. “We could tell right away.”

The new guidance also removed promptness for sexual assault investigations, giving no fixed time frame under which a school must complete a Title IX investigation. Under the Obama administration, a resolution was encouraged, but not required, to be made within 60 days.

The lawsuit also says department leaders violated due process protections of the Fifth Amendment and the Administrative Procedures Act.

“Now schools know they can lay back, take their time,” said Dunn.