When a pipe bomb was found under a chair in an administrative building, an automated text message reporting an active shooter was wrongfully sent.

The pipe bomb had to be detonated by the Minneapolis Bomb Squad and the Bureau of Alcohol, Tobacco, Firearms and Explosives.

The discovery of a pipe bomb on Thursday at a Minnesota college led to an evacuation, canceled classes, and the sending of an automated text message inaccurately reporting an active shooter.

Police found the bomb under a chair in the common area of administrative offices at Hennepin Technical College in Brooklyn Park, reports the Star Tribune.

The bomb was made out of a steel pipe that had been filled with shrapnel. The ends were capped and wires hanging out, says Brooklyn Park Deputy Chief Mark Bruley.

The bomb was brought outdoors and detonated by the Minneapolis Bomb Squad and the Bureau of Alcohol, Tobacco, Firearms and Explosives.

“It is clear to us that it was intentionally made to appear as an explosive, but because it was disrupted for safety reasons, we don’t know what its capacity was, or if it was even capable of being detonated on its own,” says Bruley.

Regional and federal investigators are testing the device to see if it contained explosive material, according to MPR News. Bruley says there are cameras in the area whose footage will be reviewed as part of the investigation.

According to a statement from school officials, an email was sent out with correct information and proper protocols were followed to alert the campus community.

However, due to “human error”, an automated text message reporting an active shooter was sent, advising students to run, hide or fight.

A corrected message was sent 25 minutes later, saying the campus was being evacuated due to a “safety concern” but that there was no active shooter event.

“Just know that the administration and Minnesota State is really thinking about the students first and we will do everything possible to make sure their safety is the top of mind,” says Hennepin Tech spokesperson Nairobi Abrams.

Classes resumed at the college on Friday. 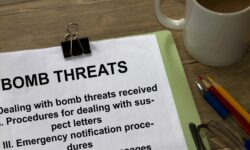