Congratulations to Jeff Hauk Memorial Healthcare’s director of public safety and police authority services for being named Hospital Director of the Year!

Back in February of 2014 when Jeff Hauk was hired as a temporary contractor at Memorial Healthcare in Owosso, Mich., “creating a culture of security” was his assignment. His job was initially intended to last only six months.

More than three years later, however, Hauk’s role has evolved so that he is now Memorial Healthcare’s full-time director of public safety and police authority services. In those three-plus years, he has applied a metrics-driven approach and a smart change management strategy to totally transform the organization’s protective environment and establish a new, highly trained and professionalized public safety department.

That’s why he’s been named this year’s Healthcare Campus Safety Director of the Year.

Hauk Gets Buy-In From the Executive Team

According to Ruthann Liagre, who is Memorial Healthcare’s vice president of human resources, when Hauk first arrived, the security function consisted of one full-time and four part-time security guards attached to the facilities department, working second and third shifts only.

“There was little to no respect shown for the guard staff, and a reputational overhaul was long overdue,” she says.

To start, Hauk became a permanent member of Memorial’s leadership team and also now sits on the

The results of Hauk and his team’s work are impressive. His department scored highest overall as well as first in four of the five categories surveyed among all ancillary service departments in Memorial Healthcare’s ancillary services survey. Other improvement resulted in cost savings. For example, the installation of LED lighting saves Memorial Healthcare $10,000 per year.

Change Must Be Managed Carefully

Implementing all of these changes in such a short amount of time was no easy feat, and Hauk took a multi-faceted approach to managing change effectively. He consulted a wide variety of stakeholders to develop their buy-in. Empathy, communication and a positive attitude also played important roles, particularly when he was interacting with his officers.

“In order for change to happen, you have to be able to relate to others and be genuinely empathetic with them,” he says. “I know that in jobs where I had to make changes — good or bad — the way I approached it made a huge difference in its success. I find that showing your staff the good effects of change encourages them to accept and/or initiate change in other processes and procedures, and this makes a positive impact on your organization.

“How you address [change] and communicate it to your employees is critical. If you are negative about change, it affects the acceptance of the change by those around you. A good leader is a change champion and driving force behind the acceptance of changes made in an organization.”
Some of the steps that Hauk took to implement change at Memorial Healthcare included:

Hauk is also a big believer in using metrics rather than speculation to drive change.

“Security metrics are not about numbers, they are about performance,” he claims. “Unless you have the intestinal fortitude to adequately plan and consistently execute a program to legitimately measure how well specific security programs are delivering on their objectives and are prepared for the answers you may get, you are wasting your time. They should be strategic, demonstrating return on investment, organizational relevance and easily communicated.”

Examples of metrics collected by Hauk’s team include what he calls “touches, near misses and interventions.”

Touches are not the number of patrols conducted, incidents, visitor passes provided or hours an officer is on post. They could be opening a door for a staff member.

“[A touch] is the interaction with the customer and the results of that interaction,” says Hauk. “Reporting the number of times security accompanied and/or assisted staff to their designation, provide directions or escorted them to their vehicle is a more definitive evaluation of the service.”

He also says a touch can be positive or negative.

Another metric used by Hauk is “near misses,” which describe an intervention or discovery of an incident that could have been averse but was averted.

“This concept is more readily identifiable than a door found open, a behavioral health patient that attempted elopement and was stopped or the continued denial of an access card being presented to the pharmacy door,” Hauk says. “In lieu of reporting the number of doors found open, reporting a near miss related to a purse left unattended or a computer that could have been stolen is a better, more understandable metric. Not reporting the patient who almost left the hospital or the employee who is continually trying to access a door they have no access to negates the effectiveness of the security services provided to the institution. A near miss is an evaluation tool that risk management, clinical staff and executives can understand.”

This term describes a planned or unplanned interaction with a patient or client because of negative or potentially negative behavior. Examples include patient restraints, patient watches or disorderly visitors.

“An intervention is a metric that can describe aspects of the execution of the security professional’s job that is not demonstrated by reporting basic workplace violence,” Hauk says. “Using interventions as a metric demonstrates actions taken to improve a declining or detrimental situation and can be used to categorize the workload conducted by security staff in the prevention of violence in the hospital.”

Hauk believes using this particular term assists the emergency department, behavioral health and other administrators better understand the use if this metric by security and can provide a more defined application of security services.

Healthcare Director of the Year Winner at a Glance

Name: Jeff Hauk, CPP, MSA, PEM is the director of public safety and police authority services for Memorial Healthcare in Owosso, Mich. He’s been serving as its director since February 2014.

Hauk and his team’s efforts have resulted in more than 100 improvements to Memorial Healthcare’s security and parking operations.

“His accomplishments are truly extraordinary,” says Liagre. “Consequently, staff morale has never been higher, staff respect for officers has been exponentially enhanced, the amount and type of training for our officers is of five-star quality, his plans for continuous improvement are remarkably forward-looking, the use of technology is at an all-time high and the public safety department exudes professionalism. He has accomplished more in a couple of years than many other security directors accomplish in a decade.” 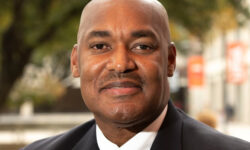