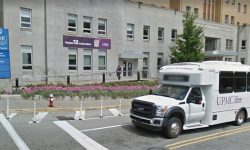 The man allegedly responded to medical emergencies with the Rapid Response Team at UPMC Presbyterian Hospital in Pittsburgh.

The policy changes are meant to improve infant security at the Birthing Center of Northern Hospital of Surry County.

The hospital’s surveillance cameras captured the suspect leaving with the newborn.

Homer G. Phillips Hospital, which closed in 1979, is being accused of stealing babies while telling mothers the infants had passed away.