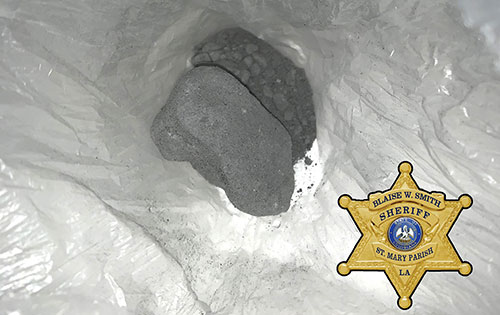 St. Mary Parish Sheriff’s Office in Louisana is warning the public about a potentially lethal drug that has surfaced in the area and could kill someone who touches it.

The drug, referred to as “gray death” because of its similar appearance to concrete, is heroin that has been laced with fentanyl, a synthetic opioid the U.S. Drug Enforcement Agency says is 80 to 100 times stronger than heroin, reports CBS News.

“You don’t want to touch this. If it all possible, you don’t even want to put it on your hands,” said David Spencer, a spokesperson for the St. Mary’s Parish Sheriff’s Office.

The powder can be inhaled or absorbed through the skin and can rapidly lead to fatal respiratory depression, according to drugs.com. Gray death users inject, swallow, smoke or snort it.

The drug has been tied to thousands of fatal overdoses in the U.S. and first started circulating in Georgia and Alabama in 2017. It eventually made its way to Ohio and Pennsylvania and has now put St. Mary Parish officials on high alert after it was discovered during several recent arrests, according to The New York Post.

In Ohio, a police officer overdosed after he accidentally inhaled the drug, according to KXAN. He and his partner pulled over two suspects who were accused of having drugs in their car. The suspects began stomping on the drugs to destroy the evidence, sending tiny particles into the air.

4 responses to “‘Gray Death’ Drug Could Kill By Simply Touching It, Police Warn”