FreshAir1’s sensors are able to monitor for and detect specific molecules in both tobacco and marijuana smoke. 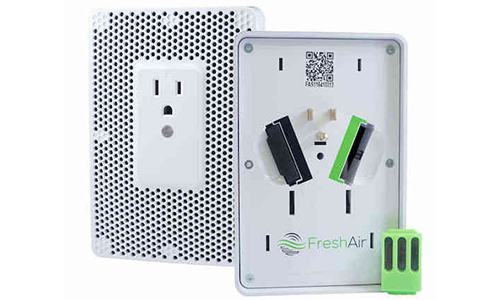 LEBANON, N.H. — FreshAir, a developer of sensors to detect hazardous chemicals, announces the release of its FreshAir1 Smoking Detection System, suited for use in dormitories and other school and university buildings.

FreshAir’s detection devices can be plugged into standard outlets and are secured with tamper-proof screws. If a device is removed from an outlet by force, it will be immediately labeled as “offline” on your account.

The WiFi-enabled detection devices connect to building networks to communicate 24/7 with FreshAir’s monitoring platform. Each device in a FreshAir1 system is capable of monitoring up to 500 square feet of open space.

When smoke is detected in a monitored space, FreshAir immediately sends an alert via email, computer desktop, and/or mobile phone push notification. A smoking report is also generated for each alert, which includes a downloadable, timestamped chart that can be used as scientific proof needed to enforce no-smoking policies.

Additionally, FreshAir has developed an e-cigarette vaping sensor that allows users to monitor for and specifically detect vaping. The sensors will be available this year.