The survey gives insights into the state of cybersecurity in the physical security industry.

Some sexual assault behaviors were mislabelled by large percentages of people aged 18-34. 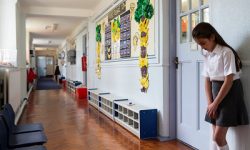 Student Discipline in Schools: Part of the Problem or the Solution?

Studies have shown that some forms of punishment can have an adverse affect on student well-being.

Study Finds Decrease in Drug Use Among High School Students

Rates of use for every illicit drug besides marijuana declined in 2016.

Study: Food Security a Problem for 7 in 10 Univ. of California Employees

The survey results could play a role in worker contract negotiations set to take place in November.

Survey: 3 Quarters of Public Safety Agencies Will Have Next-Gen 911 Technologies by 2017

Many more agencies reported having the technologies than in 2012, when less than half had NG 9-1-1 on their radar.

The poll was conducted through phone interviews with parents of K-12 students.