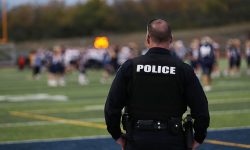 Round Rock ISD to Transition to In-House Police Department

The school district has partnered with the Williamson County Sheriff’s Office and Round Rock police officers for decades.

Bourne Public Schools Nurses to Be Equipped with Narcan

Bourne was the last town in the Cape Cod region to approve the carrying of Narcan, an opioid-overdose reversal drug, in its schools.