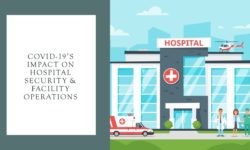 UT MD Anderson Cancer Center’s Ray Gerwitz describes the new approaches he, his department and the MD Anderson organization took to address safety and security concerns during the pandemic.

Houston Police say the woman was accompanying her husband to his doctor’s appointment when he pulled out two pistols and shot her.

February’s most popular articles covered topics such as hospital workplace violence, the future of healthcare security, and Title IX/Clery.

Presidia Gel was created in response to a request from hospital personnel for a fast-acting, non-contaminating self-defense spray.