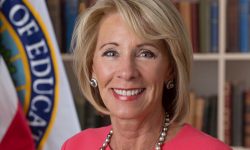 Researchers have found that although 99 percent of public comments on Title IX supported Obama’s Dear Colleague Letter on how schools should handle sexual violence claims, the Department of Education rescinded the guidance anyway.

Kissel will head a department focused on improving the inclusivity of college campuses.

The rate of sexual violence by K-12 students peaks during middle school.

The departments that made the announcement said state’s should have more of a role in determining school bathroom policies.

2 Lawmakers Vow to Reduce Role of Dept. of Ed. on Campuses

The lawmakers hope to reverse the department’s expansion under the Obama administration.