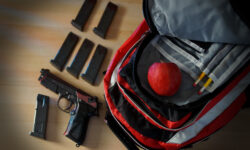 It is essential to take any and all threats seriously that intimate violence, and to implement the necessary resources and intervention.

Two suspects were apprehended near the Boise State University campus.