North Park school officials were unaware of the gunman’s criminal past and victim’s concerns about him.

The gunman responsible for the shooting deaths of a North Park Elementary School special education teacher and student on Monday had a long history of domestic abuse in his previous relationships.

Nearly two decades before Cedric Anderson shot Karen Smith (his wife) and two of her students, his previous wife sought to obtain a restraining order against him. The Los Angeles Times is reporting that Anderson’s former wife claimed he threatened over the phone to kill her. The divorce was reportedly very nasty, with him accusing her of assault.

More recent allegations of domestic violence involved a former girlfriend who also filed a restraining order against Anderson in 2016. She alleged that he abused her over several months, threatening her with a butcher knife and trying to suffocate her with a pillow.

In 2013, authorities arrested and charged Anderson with misdemeanor assault and battery, disturbing the peace and brandishing a weapon. However, the charges were dropped when the victim didn’t show up in court.

In 1982, he was arrested four times for theft, weapons and domestic violence but was not convicted.

Anderson and Smith were married for only three months when he walked into Smith’s special education classroom where he shot her to death. Two students—eight-year-old Jonathan Martinez and another nine-year-old boy – were behind Smith and were also shot. Martinez later died of his injuries.

On Facebook, Anderson posted many romantic photos and videos of him and Smith that were taken during their honeymoon and shortly after their wedding. Despite this, Smith had recently separated from Anderson. He repeatedly asked her to return and made several threats, which she reported to her family, reports KTLA.  According to ABC News, Smith was somewhat private about her personal life and only shared about the problems in her marriage with her immediate family. As a result, school officials were unaware of the threat posed by Anderson.

Anderson entered the school through the main entrance. According to San Bernardino Sheriff John McMahon, “He was allowed access because of his prior relationship and no prior knowledge of any threats,” reports CBS Los Angeles.

Cameras on campus show Anderson trying to get into other doors before going to North Park’s main entrance.

Armed police officers are at every high school and middle school in San Bernardino, but not at the elementary schools.

Parents should get their children the COVID vaccine, says St. Jude pediatric virologist 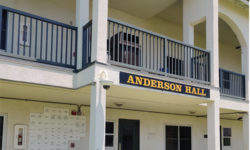