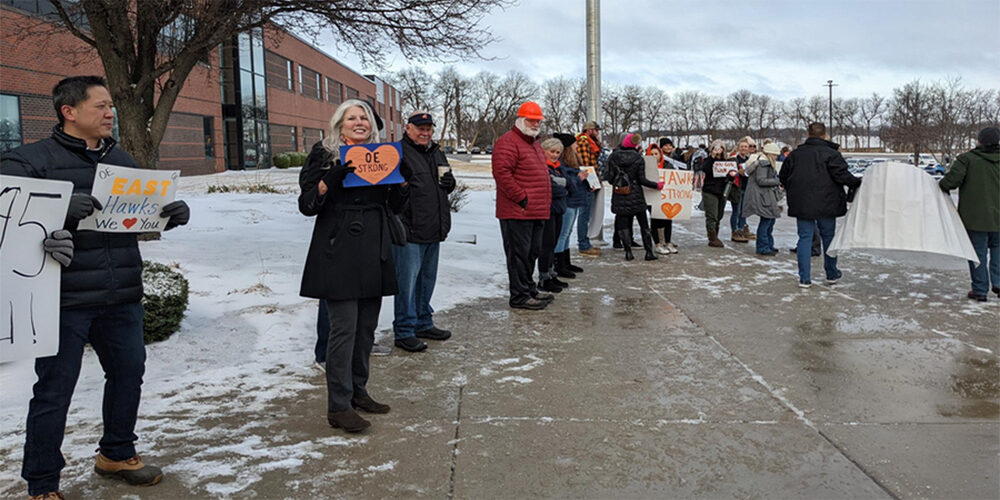 Olathe East alumni and other community members lined the walkway to the main entrance of the school as students returned to class Monday. (Photo provided by Olathe Public Schools to Fox 4)

Jaylon Desean Elmore, a senior at the school, has been charged with attempted capital murder in the shootings of a school resource officer (SRO) and an administrator, reports KMBC.

According to a preliminary investigation, assistant principal and athletic director Dr. Kaleb Stoppel pulled Elmore from class Friday morning and brought him to his office after receiving a tip that he had a gun in his backpack. When Elmore allegedly refused to open his bag, Stoppel called for SRO Erik Clark.

Olathe police Sergeant Joel Yeldell said the SRO then radioed dispatch just after 10:30 a.m., indicating he and Stoppel had been shot and wounded by the student. Yeldell said Clark also returned fire, injuring the suspect.

All three were taken to Overland Park Regional Medical Center. Stoppel and Clark were released from the hospital later that day. Elmore remained hospitalized and in critical condition as of Saturday.

A judge set Elmore’s bond at $1,000,000 cash or surety with the conditions that he remains on house arrest with GPS monitoring, does not go within 100 yards of the victims’ residences or places of employment, does not use illegal drugs or controlled substances, and must submit to testing when directed by the court.

Court records show Elmore was convicted in a Feb. 6, 2020 robbery where he stole a wallet from a person “by force or by threat of bodily harm, and did inflict bodily harm.” Since he was a juvenile, he was sentenced to six months of probation, according to The Kansas City Star.

As students returned to class Monday, alumni and other community members lined the walkway into the school, reports Fox 4. The school has counselors on hand to support students and staff. Members of the Olathe, Blue Valley and Shawnee Mission Father’s Club and therapy dogs were on hand to offer support as well.

School leaders said there will be flexibility in grading and attendance in the coming weeks.