Six lawsuits have been filed against the Chandler United School District, claiming officials knew of sexual abuse by football players but did not report it.

The Chandler Police Department has recommended that charges be brought against the former coach and principal in connection to the sexual assaults.

The family of a sixth student who alleges he was sexually assaulted by Hamilton High School football players filed a claim on September 7 seeking $10 million from the Chandler United School District.

The claim filed by the family’s attorney, John Torgenson, alleges the school district was negligent in both hiring and supervising football coaches and did nothing to stop known sexual assaults.

Five other alleged sexual assault victims had previously filed claims against the Arizona school district, claiming school officials knew of the sexual assault incidents but did not report it to police. The first five victims’ claims, filed by Attorney Daniel Raynak, seek a total of $34 million in damages, according to 12 News.

Torgenson says his client was sexually assaulted on January 10, 2017, during an off-season training class.

According to the family, their son entered the locker room and was surrounded by varsity football players as he began to change into his workout clothes. The claim says he was held down and his boxers were removed. He was then touched inappropriately and penetrated with fingers and an unknown object, reports ABC 15.

Documents say the abuse continued for three minutes and was recorded by several players who posted the video to Snapchat.

“Based on what he told us, hundreds of students may have seen the video,” says Torgenson. “This was absolutely humiliating for him.”

Torgenson says his client did not report the assault “out of shame, fear and embarrassment”.

The boy’s mother says she first learned of the assault in April when an officer from the Chandler Police Department called to notify her that her son was an alleged victim.

After receiving the call, she approached varsity football coach and history teacher, Steve Belles, who reassured her that school administrators would look into the accusations.

The mother and her son then met with a district official to request a transfer to a different school. After extensive questioning, says the mother, their request was not immediately approved.

Her son remained at the school for several more weeks where he received social media messages threatening violence and calling him a snitch. She also alleged that a teacher asked him why he and his family went to the district office in front of an entire class.

In July, the Chandler Police Department recommended charges be brought against the head football coach and the principal for the alleged abuse that occurred between fall 2016 and January 2017.

The department says the men should be charged with failing to comply with the state’s “duty to comply” law and child abuse.

According to a police report, student-athletes claim that in team meetings, Belles referenced the hazing incidents he was aware of, saying to “stop raping each other” and “don’t do sexual things to each other”, reports ABC 15. He also allegedly walked in during an assault but ignored it.

The report additionally claims principal Ken James did not report the incidents to authorities after two students’ parents informed him of sexual assaults involving football players.

After receiving another message from an unknown caller reporting the harassment of players in the locker room, James conducted interviews with four juvenile students but did not notify their parents. One of the students that were interviewed told James that his clothes were forcibly removed by other players.

James then forwarded the multiple complaints to Belles, telling him to “address the behavior of the team”. He did not report them to authorities.

The case remains under review and no charges have been filed against the men.

Thomas’ next court hearing is scheduled for October 11.

Two other former football players, both 16, have been charged as juveniles with kidnapping, aggravated assault and assault.

On Friday, Chandler school district spokesman Terry Locke informed parents that James, Belles and athletic director Shawn Rustad were reassigned to “work in other district-related duties away from the Hamilton High campus”, reports USA Today. Locke did not say where they were reassigned to.

“While none of the employees have been charged, it could be some time before the Maricopa County Attorney’s Office decides how it will proceed,” says Locke. “Therefore, to avoid any distraction caused by this uncertainty, the district administration and employees believe that reassignment is the best course at this time.”

Assistant principal Chris Farabee, who has been at Hamilton for 14 years, will take over James’ responsibilities as acting principal. Sharon Vanis, a former athletic director at the high school, is filling in for Rustad and another teacher will take over Belles’ history classes. 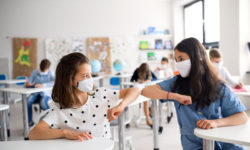