Featuring a five-screen projection system and surround-sound effects, the FATS 300LE system from Meggitt offers insights into how law enforcement can improve situational awareness and marksmanship. 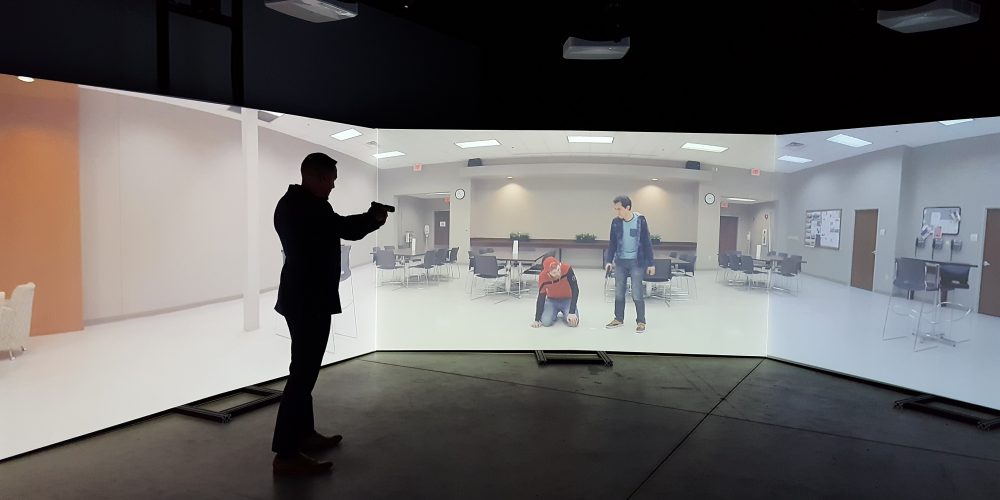 During a recent Meggitt Firearms Training Systems demonstration, the officer approaches, gun at the ready but pointing in a safe manner toward the teen, who hovers near another teen who is scared and lying on the floor. The standing teen also holds a gun, and as the officer intervenes he’s calmly but assertively talks the boy into lowering the weapon, creating a safe resolution to the volatile situation.

His words work, and no one is hurt. The immediate threat to those involved as well as the surrounding school environment is safely over … this time.

Minutes later during another training scenario, however, the situation reprises and the officer’s more aggressive de-escalation tactics lead to a very different result — the boy quickly turns the gun on himself. In another moment, the training scenario will play out again to yet another resolution; this time after the officer encounters the situation and attempts to diffuse the teen’s threats, the boy makes a motion to point the gun at the officer. In an instant, the officer shoots him with several accurate rounds to the upper body.

Though these are three very real-world scenarios — with the setting, interaction and dialog between the individuals also being very lifelike — the reality is there’s only one actual person in this school “room” and no true danger is at hand. The “officer” in this case is a Meggitt Training representative who happens to be an ex-Marine and ex-cop and really looks the part for. He is demonstrating at a room in its Suwanee, Ga., headquarters the FATS (Firearms Training Systems) 300LE immersive virtual training system. 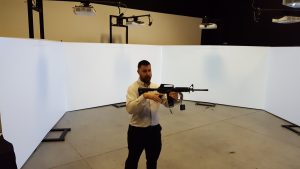 The 300LE is the latest offering in the company’s line of live-fire and virtual training systems for law enforcement and military personnel. As virtual systems gain more traction among law enforcement, Meggitt recently announced the launch of its 300LE for test and evaluation with the Gwinnett County (where Suwanee resides) Sheriff’s Office. It’s the second of three regional hubs the company is creating to demo the simulator. Besides Gwinnett County, a partnership with the Miami Police Department was announced in August and the other is with the Santa Ana (Calif.) Police Department.

“It’s a very different perspective from a training scenario,” Meggitt President Jeff Murphy says of the FATS 300LE. “You’re all aware of the need to confront whatever threat may be in front of you. The challenge with this is you have other activities going on around you, and what this does is through video and audio can create those things that the officer needs to be aware of when they’re out in the environment.

“It may be something as simple as somebody walking up and decides, ‘I’m going to take a picture of this,’ so they break out their camera. You don’t know what they’re going through in their pocket, but all of a sudden they’re shooting this video. You never know when something innocent can turn into a threat.”

So from a simulation standpoint, the 300LE brings a home theater-like atmosphere to recreate potential scenarios, adding to the capabilities of 100LE and 100P products. It employs five 150-x-84-inch borderless screens and five short-throw projectors to produce the high-definition video images, while dialog and sound effects like barking dogs, crying babies and such are piped in through a 5.1-channel surround-sound system.

“A lot of times when we’re looking at a screen [in single-screen training simulators], we might get ‘concrete feet.’ Now we’ve immersed it so you hear a sound, skidding or gunshot you’re having to look and engage. We want to get these officers in this training to actually move around,” says Meggitt’s Jerry Cheeks, a member of the sales team and also an ex-Marine, ex-law enforcement member.

The short-throw projectors installed above the screen manage to beam the lifelike video for a 3D environment but also are out of the way, Cheeks notes, so officers can get closer to the screens and interact with the simulator without shadows interfering. 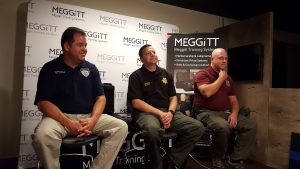 From a control console, other personnel can set the different modes to obtain various datapoints, such as speed and accuracy of an officer’s gunfire, and adjust the conflict scenarios to assess decision-making and de-escalation tactics. The system comes pre-loaded with various scenario options for the judgment courses, while built-in authoring for the marksmanship training allows instructors to create specialized courses, including quick-thinking exercises like simulating a gun that’s jammed.

Meanwhile, to assist the judgment and marksmanship training exercises for the FATS 300LE and other virtual training systems, the A/V is not the only realistic technology Meggitt uses. The FATS weapons themselves — rifles, pistols, shotguns (and less-lethal weapons like Tasers and chemical spray for judgment training) — are about as authentic as you can get. The system supports up to 20 simulated tetherless BlueFire weapons.

“What really does set us apart in the industry, our BlueFire weapons — they have the same fit, form and function of a live weapon. We maintain within 10 percent balance and weight of a live weapon, which is key for all of our users,” explains Meggitt Director of Virtual Systems Matt Cunningham. “If you can imagine an officer, we want to provide them with the tools that are going to mimic their live weapons they carry on duty. Everything we do with this firearm is identical to what we do with a real firearm.”

That goes for features such as the safety selector switch that is the factory safety selector switch, the trigger squeeze is the actual duty mechanism, etc. Firearms communicate with the system wirelessly via Bluetooth, capturing in real-time the various analytics like accuracy or even muzzle angle position, for example. BlueFire weapons are still considered weapons by the ATF, Cunningham says, but unlike with some training weapons, they can never be converted back to a real live weapon.

In addition to the demo, officers Doug Day of the Fairfield (Ohio) Police Department, Nathan Friddle of the Gwinnett County Sheriff’s Office and Richard Pope of the City of Suwanee Police Department were on hand and discussed the impact of virtual training systems. 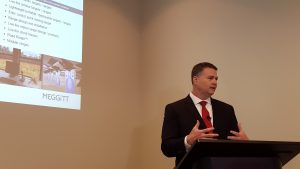 Meggitt President Jeff Murphy says systems will continue to update content to meet the training needs of customers, such as classroom scenarios for personnel such as school resource officers, and Meggitt embraces feedback from customers on ways to improve.

“What we see are flaws in the way that we do business. My guys and girls that get out there … we do things subconsciously that we don’t know what we’re doing, and I catch that through my virtual training,” says Day. “And then we use that as a tool and make them better at what they do. It’s OK to make a mistake on a virtual machine; when we’re running live-fire weapons we can’t make mistakes.”

Pope says the technology especially resonates with younger law enforcement personnel who have come to expect and use it in their daily lives. “They respond better to the virtual systems as far as the diagnostics, the use of force … I think it’s just technology is ingrained. When we have this technology and it’s constantly upgrading, it constantly evolves, I think as trainers we get a better response,” he says. For older officers, the data garnered from the virtual technology can support evidence of areas of improvement that perhaps they did not realize or were reluctant to believe, Pope adds.

“Our end goal is really to try to make the training as realistic as possible because if your training does not provide them a sense of what they’re actually going to face in a real-world scenario, you’re going to lose the interest of the officers participating in it,” says Friddle, “and if they’re not fully engaged and not reacting the way that they normally would, then that training value is decreased exponentially. And at the end of the day you’re not as effective with the [often limited] training time that you have available.”