Bomb Detection Could Be the Latest Drone Application

A team of University of Wisconsin graduate students has developed an interesting new drone technology.

Drones continue to be equipped with cutting-edge technology, but now they have the potential to save lives and thwart terrorist attacks.

The University of Wisconsin-Madison has developed technology that gives drones the capability to detect explosive devices and active land mines from previous wars. The detection technology – which can also detect chemical and nuclear weapons, as well as drugs – was developed five months ago by Fusion Technology Lab graduate students, according to Jerry Kulcinski, an emeritus professor of nuclear engineering and director of the lab.

Here is an excerpt from the Wisconsin State Journal report:

The centerpiece of the system is a fusion device that paints a target area with neutrons. Then sensors look for gamma rays or other particles with the signatures of specific materials such as explosives or a nuclear device. It’s the same technology used at security checkpoints to scan luggage and shipping containers in airports, but the breakthrough for the UW-Madison scientists was making the radiation source small enough to mount on a drone.

That added mobility makes the technology a potential game-changer: Military convoys could be alerted to roadside bombs. Rescuers could dig directly toward people buried by earthquake rubble. Valuable mineral deposits could be mapped.

Kulcinski added that he believes the technology is a year from being in the field, noting that the project needs a company to fund its completion or purchase it.

The technology could be used in a variety of security applications. “In a very practical manner, I think this can be a tremendous tool,” said Col. John W. Weidner, who manages the U.S. Department of Energy’s National Nuclear Security Administration. “From what I’ve read, its applications are only limited by the imagination of the user.”

Read Next: Ambiguity Remains Between State and Federal Drone Laws 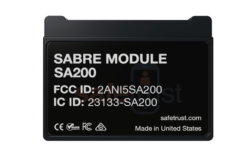