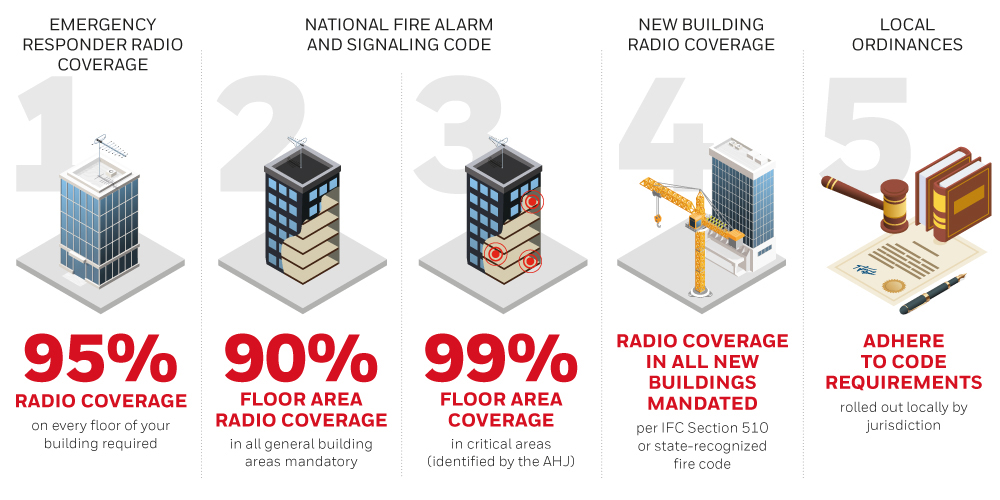 Fire fighters, EMTs and law enforcement officers rely on two-way radio communications to coordinate emergency responses, evacuations and other life-saving operations. However, a 2017 survey of the International Fire Chiefs Association members* revealed that 98.5% of Fire Departments reported dead spots in buildings due to poor radio coverage. In addition, 56% of First Responders reported having experienced communications failures during an emergency incident within the prior 24 months.

As a Campus Safety Director, you need to know that your campus buildings may weaken radio signals that First Responders rely on to orchestrate emergency responses, evacuations, and other life-saving protocols. Concrete, glass windows, metal structures, below-grade build outs, RF interference, among others can cause emergency radio communications to become unreliable or drop altogether.

As a direct result of the World Trade Center disaster in 2001, the National Institute of Standards and Technology (NIST) published recommendations in 2011 to improve code and public safety. Included was a recommendation to update national fire codes to ensure reliable radio coverage in all buildings. Most current adopted Fire and Building Codes require Emergency Responder Radio Signal strength and coverage to be measured in all new and some existing construction. Code changes specifically required:

Product performance listings and standards (UL2524) were only recently introduced for ERCES/BDA systems. Prior to these new standards AHJs (Authorities Having Jurisdiction), architects, engineers, campus safety officers and building owners could not be 100% certain if BDAs were code compliant and whether they would perform as claimed by manufacturers.

As a campus safety officer, it is your fundamental requirement to ensure the safety of your student, staff and visitor population. With building codes and installation standards in place, it is in your best interest to implement those requirements at your campus level. Not only will it serve your community and safety personnel at a higher level, it will also mitigate risk and cost of retrofits down the road.

Honeywell offers training sessions on BDA requirements and systems that can ensure your campus is ready for the local ordinance and code changes.

With a BDA system in place, you can safeguard not only the on-site lives and assets, but also protect first responders in an emergency. Request an assessment to see if the BDA solution is right for your specific campus.

How Good Are Americans at Social Distancing? It Depends