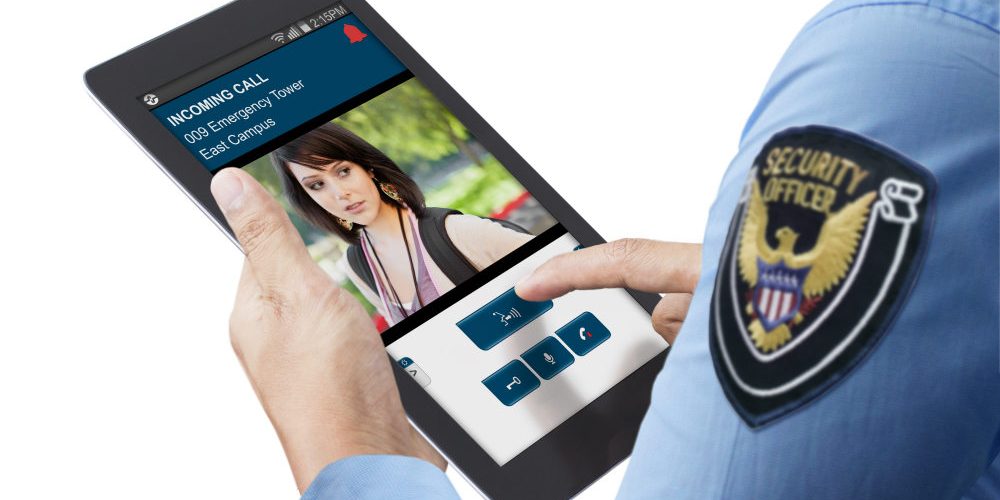 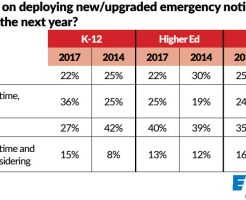 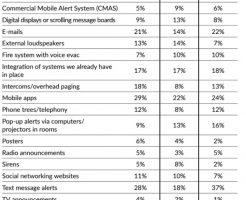 According to Campus Safety magazine’s latest survey, emergency notification and alert systems continue to be a popular technology purchase for schools, universities and hospitals.

That said, this year’s results indicate some potential shifts in the nature of the upgrades, who has the authority to issue alerts, community outreach programs and more.

In the survey, more than 1,000 protection professionals from healthcare and education provided their input on every- thing from planned purchases, policies, technology challenges, funding and other topics. Here are the results.

View all the charts and results here!

Half of Respondents Interested in Buying New Emergency Notification Systems

When broken down by sector, however, there are some differences. K-12 schools and districts appear to have the greatest interest, with 58 percent saying they plan on or are considering purchases. That’s an eight percent increase compared to 2014. Higher ed buying interest is about the same, while hospitals have experienced a nine percent drop, from 58 percent in 2014 to 49 percent today.

Additionally, text alert systems and mobile apps are now the most popular purchases. The use of mobile apps has more than doubled in K-12 schools and districts (from 11 percent in 2014 to 30 per- cent now), while it’s jumped in higher ed by 14 points and hospitals by 11 points.

Text alert usage has increased by 12 percent in schools and seven percent in colleges and universities. Hospitals have increased their use of call boxes by eight percent.

It should be noted that every single category covered in this year’s survey experienced a decrease in buying interest.

What this means is difficult to determine, especially because some of the decreases were quite small. It might be an indication that hospitals, schools and universities are more satisfied with the emergency notification systems they currently have in place and might be making more incremental upgrades than before.

The most significant decreases in purchasing interest for the K-12 sector included bull horns (an eight percent drop compared to 2014); CMAS, call boxes and emails (all three experienced a nine percent drop); and phone trees and website announcements (a six percent drop for each).

There has been mixed progress when it comes to integration. Slightly more respondents now say their emergency notification systems are integrated than three years ago, with hospitals and colleges having the most significant jump (six percent and five percent respectively).

Unfortunately, K-12 schools have gone backwards somewhat with six percent fewer saying they are work- ing on integration and three percent more saying their systems are not integrated.

Are Community Outreach Programs No Longer a Priority?

Overall, it appears that campuses are making less of an effort to sign up campus constituents for text alert services, which could be a concerning trend.

Now only 34 percent of hospitals use new-hire orientation. That’s 14 percentage points less than in 2014.

The percent of K-12 respondents who use new-student orientations has also dropped 14 points, while institutions of higher ed using this method have dropped five percent. The use of email announcements has dropped by 16 percent in K-12 schools and 19 percent in hospitals.

The use of website announcements has dropped as well compared to three years ago: 20 percent in K-12, nine percent in higher education and 10 percent in healthcare.

Is this an indication that schools, universities and hospitals aren’t working as hard at communications and community relations? It is hard to determine.

That said, these statistics hint at the possibility that these types of efforts might not be as high a priority as before. Or, it could mean that they have been fully incorporated into the campus culture so no one worries about them like they did in the years after the Virginia Tech mass shooting when campuses were scrambling to get systems, policies and procedures in place.

In the past three years, there hasn’t been much change in most of the categories of campus personnel who are authorized to issue emergency notifications. That said, there appears to be a shift in authority to more junior positions.

Hospital respondents indicate they are currently having more challenges with their emergency notification solutions than before. Now only 10 percent say they don’t have issues with their systems.

Three years ago, more than one in four indicated they had no problems. Although database management is the top challenge overall, it is particularly problematic for hospitals.

More than a third (35 percent) say it’s an issue. Hospitals are also experiencing more problems with determining when it is appropriate to issue an alert; not having enough staff to manage and operate the systems; buy-in from management; email and spam filters; equipment maintenance; and clarity regarding who has authority to issue alerts.

That’s down seven points compared to three years ago when 23 percent said they didn’t have any problems.

The slideshow includes in-depth charts and explanations of the survey’s findings.