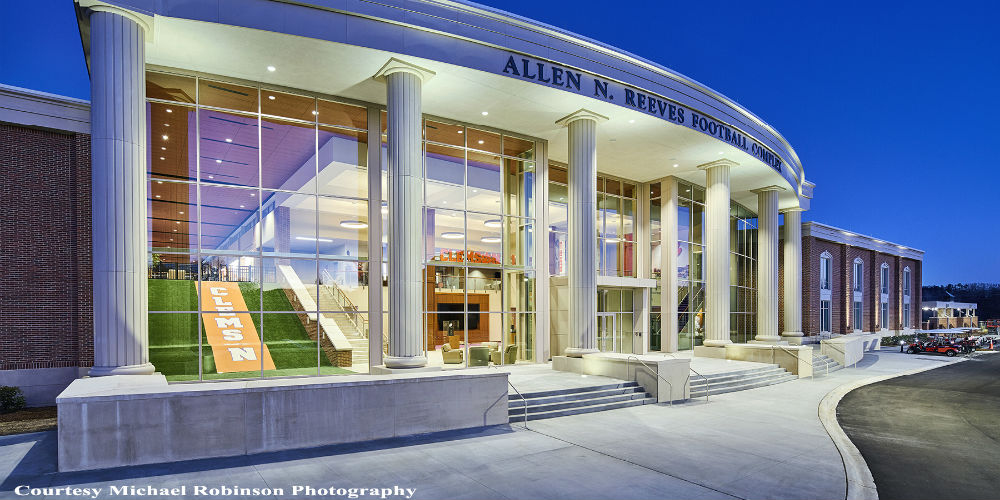 When Clemson University constructed a new state-of-the-art home for its 2016 NCAA championship football team, it required a fire protection solution equally as impressive. But in order to do so, it had to rethink conventional wisdom with a radical, more flexible approach to fire code interpretations.

The Allen N. Reeves Football Complex is the first in South Carolina history to utilize a performance-based design code analysis approach (tested to meet specific goals) to fire code safety, instead of a traditional prescriptive approach (adhering strictly to written codes), according to Paul Borick, one of Clemson University’s Capital Projects, project managers for renovations and new construction.

“Universities have so many uniquely shaped or large volume spaces — like sports centers, pools, weight rooms, aerobic rooms, as well as classrooms and labs pushed up against multi-story structures and assembly areas — that don’t quite fit the prescriptive fire code,” says Borick.

In traditional prescriptive based designs, building codes usually require specific, measurable design criteria that are meant to govern typical building situations, based on past loss history and standard construction methods. While this works well in routine cases, the approach can lack flexibility when buildings have unusual design parameters.

As an International Code Council (ICC) accepted alternative, however, performance based design allows “alternate materials and methods” that offer equivalent or superior fire safety performance. In terms of enhancing fire safety, this often involves utilizing scientific calculations and engineering as well as computer fire modeling to determine how a building would respond to fire. With this approach, a design is considered acceptable if the fire engineering calculations demonstrate that it meets the measurable performance criteria set at the start of the process.

“We wanted to put a new two-story football complex building next to our indoor practice facility, which has a full football field, but the prescriptive code made this difficult,” says Borick, who sought to avoid separating the two buildings in order to keep the team on a tight, regimented schedule.

According to Borick, this design was important to allow players to go from one area to the next (such as from the weightlifting room to the practice field) without having to walk outside in adverse weather conditions.

“The challenge was that if we attached the two buildings, the prescriptive code would have required us to separate the buildings by 60 feet or create a firewall between them, as well as fireproof all the existing structural steel in our big, open 100,000 square foot facility,” says Borick.  “This would have cost well over $1 million, so we had to find an alternative.”

Due to the project’s unique design requirements, modification of the indoor practice facility was necessary to accommodate the construction of the adjacent two-story building.

By adopting a performance-based design approach, computer egress modeling software and an innovative smoke detection technology, the university was able to dramatically reduce the project cost while increasing safety. 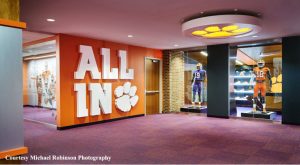 In a performance-based design approach, it turns out, one of the ways to meet safety code is to utilize egress modeling.

As such, Jensen Hughes employed Pathfinder egress modeling, which enables advanced evaluation of pedestrian movement, evacuation and congestion studies through software-based simulation. This included going to the facility and observing how the football players moved throughout their existing building and interacted with each other in egress corridors and room exiting.

“Jensen Hughes staff filmed how our football players exited their main team room and moved together before entering their individual position meeting rooms,” says Borick.  “They analyzed the video to determine how their exit could be expedited and restrictions removed.”

Along with this, Clemson University utilized advanced smoke detection technology in the form of four VESDA-E VEA fire alarm system units, manufactured by Xtralis, a global provider of early detection and remote visual verification of fire, gas and perimeter threats.

“For the VEA your detection time is essentially zero,” says Ernst. “We had multiple scenarios with different levels of occupant loading in the building based on the way the university uses it. Overall, we gained 2-3 minutes of time to egress for each scenario due to early detection [compared to standard detection].”

In smoke detection, advanced technologies such as the VEA provide earlier warning by aspirating — or drawing in air — from each room through small, flexible tubing. The air is then analyzed to identify the presence of minute smoke particles in a continuous process.

This is in stark contrast with the way traditional smoke detectors are designed. Conventional detectors are typically installed in each room or common space and connected to a central fire alarm panel by low voltage electrical wiring. When a significant amount of smoke accumulates in the chamber of the smoke detector, the alarm sounds.

“The VEA allowed us to get earlier warning to the occupants, which allowed them to move earlier and fully egress the building in less time than the prescriptive alarm initiation requirements,” says Ernst.

“By going to a performance-based design and [aspirating technology], egress is faster and the building safer than if we followed prescriptive code,” agrees Borick.

As a multi-channel, addressable system, the central unit can pinpoint the exact location of the alarm. A single system supports up to 40 sample points and can be extended to 120.

The system is also sophisticated enough to allow for three levels of sensitivity that can significantly reduce false alarms. For example, the system can differentiate a fire alarm triggered by someone smoking in a room from an alarm activated by a smoldering fire.

“The VEA system provides earlier, more intelligent alerts so the fire department can act quickly,” says Borick. “Eliminating false alarms is also important so our football players and coaches do not have to vacate the building any more than is necessary.”

Even with these benefits, one of the primary advantages of an aspirating smoke detector system is its ease of maintenance, inspection and servicing.

While spot smoke detectors are reliable and relatively easy to install, NFPA regulations also mandate annual inspection and testing of each unit for many facilities including colleges and universities. This tedious and time-consuming process requires a fire alarm contractor to enter each room, introduce smoke directly into the detector and verify that it functions properly. This is often covered under ongoing maintenance contracts where fire alarm contractors make a significant amount of their profit.

According to Ernst, the aspirating technology significantly simplifies such annual smoke detector maintenance. 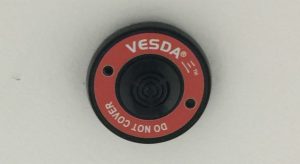 “Maintenance-wise, you have a few VEA detectors with about 160 sampling points in this building [that can be tested from a central location each year], which is a lot simpler,” says Ernst. Traditionally, that would have required about 160 spot smoke detectors to be tested every year at varying heights and locations, including some 20-30 feet off the ground, such as the weight room.”

Since the NFPA requires an annual inspection of detectors to ensure that they are functional, the ability to test them from one location also enhances security at the Allen N. Reeves Football Complex.

“It is top secret stuff these days and we don’t want contractors wandering around unescorted,” says Borick. “It helps with security that the detectors can be checked from one spot.”

For university administrators overseeing any type of building, addition, or renovation that does not quite fit the prescriptive code, Borick recommends considering the use of a performance-based code provision.

“The ultimate goal in any collegiate environment is safety, getting people out of the building quickly in case of a fire,” concludes Borick. “In that regard, by following performance-based design, I think we have created a much safer environment for our student-athletes in this new facility than if we followed the prescriptive code. While our project may be the first to use this design method in South Carolina, I soon expect a slew of such projects may also consider this method on campuses nationwide.” 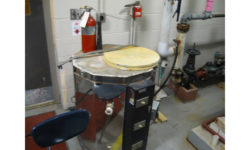 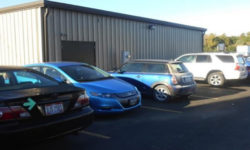