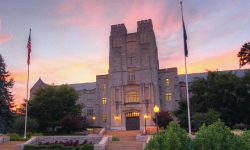 Emergency preparedness measures on campuses are unrecognizable compared to how they looked before the Virginia Tech shooting.

The LiveSafe smartphone application allows for students and faculty to connect with campus security.

Fines totaling $32,500 stemmed from the 2007 mass shooting at the school where 33 people died and many more were wounded.

Va. Tech’s Flinchum to Step Down