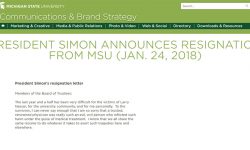 A woman alleges Old Dominion University mishandled her reported sexual assault and now her conversations with an advocate may be handed over to the defense.

Since 2013, administrators at Morehouse College and Spelman College have been criticized for their handling of reported sexual assaults.

The man admitted to recording at least a dozen young boys engaging in sexual activity inside of the Maryland school during school hours.

Six lawsuits have been filed against the Chandler United School District, claiming officials knew of sexual abuse by football players but did not report it.

The two students accused UCLA officials of discouraging them to report sexual harassment.