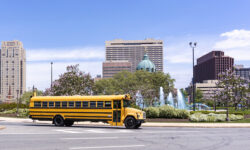 The Guilford County Board of Commissioners met with school leaders back in June to discuss the issue.