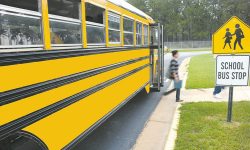 How Will Your School Bus Drivers Respond to an Emergency on the Bus?

A student says rescue crews had to saw through the school bus and break windows to get trapped riders out of the wreckage.

The school bus cameras are meant to improve student safety and deter bullying.

Reducing the Risks of School Bus Safety and Security Incidents

The school bus company will invest in a complaint management system, a video surveillance system and a new executive safety position.

The crash left at least five students dead and many others injured.

The department stressed that no students were in danger following the mishap.

Scary footage of the incident has gone viral and the bus driver responsible has been fired.