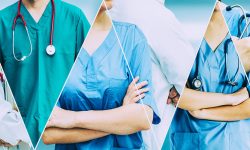 The National Institute for Occupational Safety and Health (NIOSH) recommends healthcare professionals following these eight practices to protect themselves.