The hospital’s surveillance cameras captured the suspect leaving with the newborn.

An Arizona man was caught on camera attempting to kidnap his two-day old child from an Arizona hospital after staff found drugs in the infant’s system. 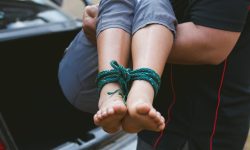 In an attempted abduction, police say a man picked up a nine-year-old boy and attempted to carry the student out of his Oregon Elementary school classroom before a teacher stopped him.

At issue is the university’s decision to merge its police force with the city’s and whether the choice not to retain its own force impacted campus security.

Ala. Kidnapping Standoff Over, Suspect Dead

Ala. Student Kidnapping Standoff Drags on for 3rd Day