The ASR and AFSR extensions are being granted due to the coronavirus. 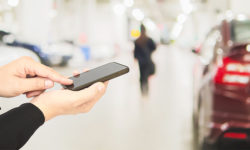 Investing in a mobile safety app for your campus could help keep 911 dispatch centers from being inundated with non-emergency calls.