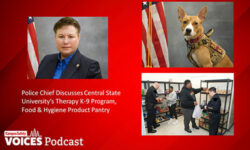 A Comfort K-9 and Food Pantry: How One Campus Police Department Supports Student Minds and Bodies