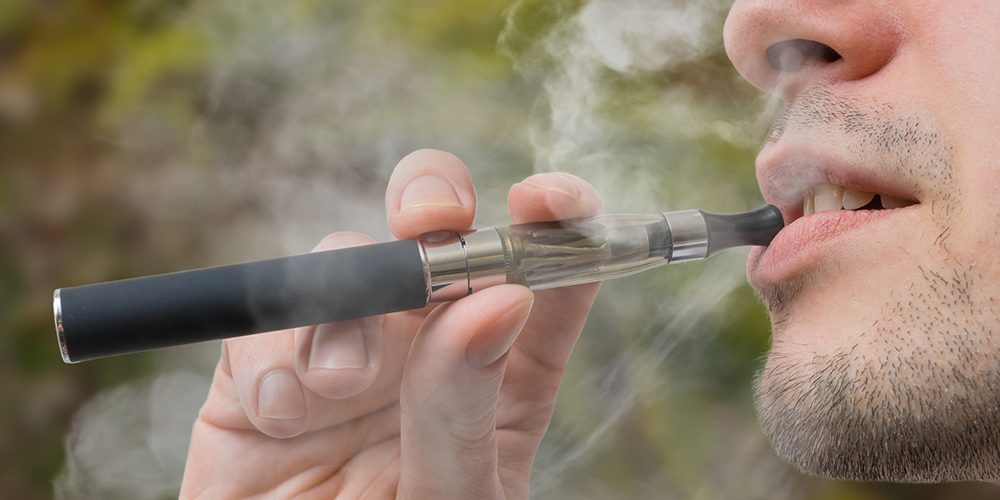 A report from the U.S. Surgeon General shows an alarming increase in the use of e-cigarettes by high schoolers.

While tobacco use among high schoolers went from 4.7 million in 2015 to 3.8 million in 2016, the significant increase in e-cigarette and hookah use has offset the overall progress, according to the 2016 National Youth and Tobacco Survey. The survey also found 1.7 million high school students and 500,000 middle school students had used e-cigarettes in the 30 days prior to the survey’s distribution.

Now the U.S. Food and Drug Administration, among others, are taking action as some believe e-cigarette companies are marketing to younger users.

An example of marketing towards younger users is product flavorings, such as cotton candy and sour gummy worms, reports CNN.

Joseph Allen, assistant professor of exposure assessment science at the Harvard T.H. Chan School of Public Health, conducted a study regarding the presence of artificial flavoring in e-cigarettes.

“Millions of kids are trying these e-cigarette products,” said Allen. “Studies show that one in five eighth-graders that currently use tobacco products got there by starting with e-cigarettes. So these e-cigarettes are also a gateway for traditional tobacco use for many young kids.”

Allen’s study found at least one flavoring chemical in 47 of 51 unique flavors tested. Diacetyl, which is associated with bronchiolitis obliterans and other respiratory diseases, was detected in 39 of the 51 tested flavors.

“Our main concern is adults having the tools that they need to quit smoking. Young adults, if they are not smokers, they absolutely should not start using a nicotine product,” said Greg Conley, president of the American Vaping Association. “Spend some time in a vape shop and see the customers that come in for these wildly named products. They are adults. They are over 25 years old, and they are the same type that watches ‘Family Guy’ on Sunday nights.”

However, vaping in the classroom has become more widespread as the designs of the products make them easy to conceal.

“(The) most popular form, it’s a Juul. It looks like a flash drive, it’s not, and the kids can just tuck it away when they’re done,” said Francis Thompson, principal at Jonathan Law High School in Milford, Connecticut.

Elijah Luna, a 16-year-old sophomore at Vista del Lago High School in Folsom, Calif., says students take a hit from the Juul and then “blow into their backpacks or into their sweater when the teacher isn’t looking.”

Some schools have gone as far as to ban flash drives to avoid any confusion. Yorktown High School in Arlington, Va., even removed the main entrance doors from student bathrooms to deter students from vaping inside.

Pamela Ling, a professor at the University of California-San Francisco School of Medicine, says because it is referred to as “Juuling” and not smoking, young users may not know it contains nicotine.

One Juul nicotine cartridge delivers approximately 200 puffs, which contains about the same amount of nicotine as a pack of cigarettes, according to the product website.

Researchers also attribute much of spike to teens mistakenly thinking there is no health risk associated with vaping or e-cigarettes, reports WCAX.

“The kids that I talk to believe that there’s nothing in there that’s dangerous. They don’t think there’s anything more than water,” Thompson said. E-cigarettes contain e-liquid, which, when heated, changes to an aerosol.

A recent study from researchers at the Mailman School of Public Health at Columbia University measured metal levels and found the vapor contained toxic metals such as chromium, nickel, zinc and lead.

“Comparing what was initially in the liquid, that was very, very tiny amount (of lead) practically undetectable. But after the e-liquid was heated through the e-cigarette device, lead levels were then 25 times higher,” said Dr. Ana Navas-Acien, a contributor to the Columbia study. “There is no safe level of lead.”

Many people are also unaware of what they are consuming because of the lack of regulations requiring uniform warning labels.

“Youth [use of e-cigarettes] is deeply concerning to me,” said Gottlieb. “We’re going to be taking some enforcement actions very soon to target companies that we think are marketing products in ways that are deliberately appealing to kids. I am going to be having conversations with some of these companies, trying to inspire them if I can, to take more corrective actions on their own. I think it’s the next epidemic among teenagers.”

One response to “FDA: Vaping Next Epidemic Among U.S. High Schoolers”