In this video, Cheryl Spittler also discusses what schools should look for in bus drivers and the importance of implementing a Multi-tiered System of Support (MTSS) into school transportation.

Although it is estimated that 10% of all student bullying occurs on school buses, a survey found 55% of drivers are very minimally included, if at all, in developing bullying policies.

The same survey found while 80% of drivers have received bullying training, nearly half of the drivers want more training to be made available to them.

At Campus Safety Conference Texas, Cheryl Spittler, a school climate expert who has trained thousands of bus drivers in behavioral management, presented on the need to implement Multi-tiered Systems of Support (MTSS) and Positive Behavioral Interventions and Supports (PBIS) into school transportation to both educate bus drivers and provide students with consistency throughout the entire school day.

Since many school bus drivers are not traditionally trained on how to handle discipline or behavioral issues like teachers or administrators, some often feel they lack the authority and respect needed to maintain safety and order, Spittler said in a one-on-one interview with Campus Safety.

“The school bus is an extension of the building itself,” she emphasized. “It’s really important that school bus drivers are trained in skills used to develop relationships with the students they transport.”

Spittler offered a handful of strategies bus drivers can use, including simple steps they can take on their own, to improve student safety during transportation while simultaneously creating a socially and emotionally safe environment.

1. Scan Bus for Both Positive and Negative Behaviors

One key way to build relationships with students is to learn how to scan for evidence of not only harmful behavior, such as bullying or harassment, but positive behavior as well.

“We tend to really focus on what kids do to misbehave when we need to focus attention on kids that are behaving,” Spittler recommended. “[Approximately] 80% of the time, kids do the right thing but only get acknowledged for it 2% of the time.”

A simple way to do this is to verbally recognize well-behaved students for their actions.

“It would be an easy thing for the bus driver to say, ‘Hey, thanks so much for looking out for your friend’ or ‘Thanks for taking care of that little kindergarten kid who needed help with his backpack,'” said Spittler.

Many schools also use reward tickets or redeemable coupons for good behavior — a concept that can be easily carried over to the school bus.

“If we shift to where we’re really focusing on the kids that are making good choices, those that are exhibiting attention-seeking behaviors may eventually switch so that they are misbehaving less often,” added Spittler.

As schools continue to invest in improved campus safety, anonymous tip lines are becoming commonplace for many districts. If your district has an anonymous reporting tool, consider adopting a similar system for school buses.

“If the school has an anonymous reporting system, you can provide some way of emulating that or copying it to some degree on the bus through an anonymous box,” Spittler said. “Make sure you’re always checking it, keeping it confidential and following through with them.” 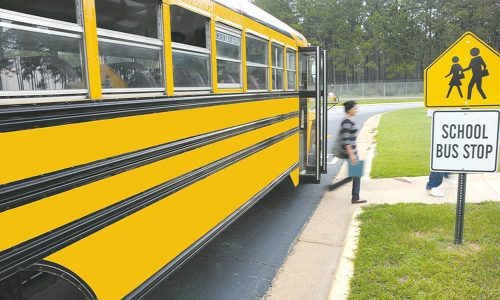 Related: How Will Your School Bus Drivers Respond to an Emergency on the Bus?

If your school does not have a bullying or harassment reporting system that can be emulated on your bus, Spittler suggests speaking with your transportation director to come up with a solution. For instance, if a child reports being bullied on the bus, the driver and the student can agree on a ‘stop phrase.’

“If I hear that stop phrase, that tells [the driver] that you mean it and anything further needs to be addressed,” she said.

When it comes to anonymous reporting, Spittler also stressed the importance of semantics.

“I like to refer to it as sharing information because reporting has that connotation of telling, of ‘I’m going to get you in trouble.'”

3. Get to Know Your Passengers

In 2015, Harvard’s Center on the Developing Child released a study that said, in part, “Every child who winds up doing well has had at least one stable and committed relationship with a supportive adult.”

While it is difficult for bus drivers to get to know each passenger in-depth, particularly in larger school districts, Spittler urges bus drivers to adopt a commonly used classroom approach to getting to know students.

“I encourage bus drivers to pick two kids. Spend 30 seconds to a minute getting to know those same two kids for 10 days in a row. By the end of the semester or definitely by the end of the school year, you should know something important or have some way to connect with each one of the students on your bus,” she said.

By getting to know your students and creating a safe space where they feel you are truly interested in them as individuals, they are more open to sharing potential concerns and are also more likely to comply with school bus rules.

According to family therapist Dr. Ellen deLara, 10% of students say their school bus driver is the person they talk to if they need help solving a problem. Preparing yourself for the possibility of being that person to a child is a huge responsibility. Make sure you are ready by taking the necessary steps.