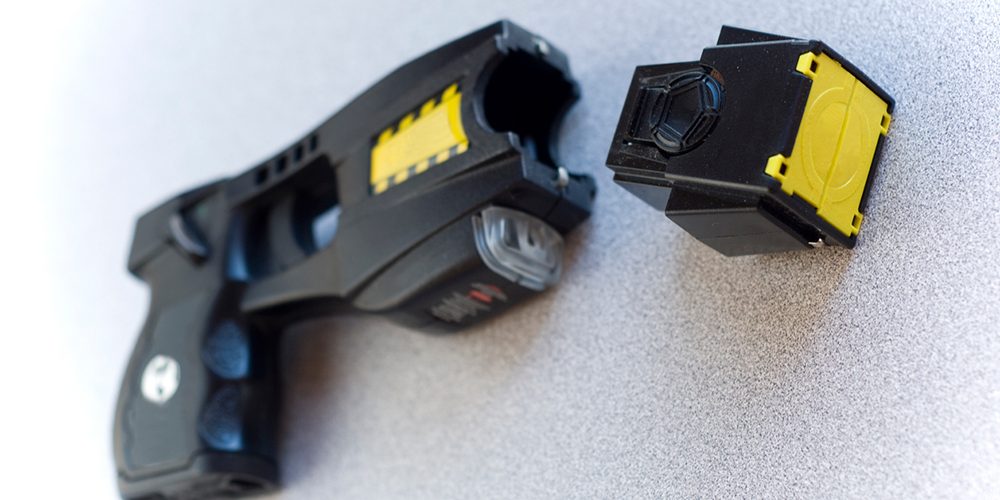 The head security officer has been charged with fourth-degree assault and placed on administrative leave.

Frederick Abernathy, 63, the director of security at the Normandy Schools Collaborative, was arrested on April 20 by the school’s own resource officer after he allegedly tased a student in the hallway at Normandy Middle School, reports ABC News.

Police say Abernathy confronted the student in the main foyer of the building as he was trying to leave and the two had a verbal argument. Abernathy allegedly tased the student as he attempted to walk away. Police confirmed an “electronic control device” was recovered.

Abernathy has been charged with fourth-degree assault, a Class A misdemeanor. He has also been placed on administrative leave by the school district and St. Louis County police suspended his security license.

Security officers in St. Louis County are not authorized to use stun guns and the district’s policy prohibits anyone other than an authorized law enforcement officer from carrying a gun, concealed weapon or any weapon capable of deadly use on school grounds, according to St. Louis Post-Dispatch.

As of April 30, all Normandy school security officers have been barred from carrying any protective device, including a firearm, baton, pepper spray or taser, McGuire wrote in an email.

District administrators say they are now finding weaknesses in the security department that has been under Abernathy’s leadership since 2005.

“We are currently working directly with the St. Louis County Police Dept. to improve procedures and to standardize training for all members of the department,” Assistant Superintendent of Operations Randal Charles wrote in an email.

While Normandy has not provided a list of equipment given to security officers, county police records obtained by the St. Louis Post-Patch through a Sunshine Law request show several district security officers are licensed to carry firearms, batons, mace or handcuffs.

The April 20 incident is not the first of its kind for the Normandy security department.

Four times this year, a Normandy school security officer has used forced, but district officials say they had no use-of-force reports on file for the last seven years. St. Louis County requires any use of force to be reported to its licensing department.

St. Louis County police have two use-of-force reports on record for Normandy SROs in the past seven years.

In an emailed statement, Normandy spokeswoman Sharifah Sims-Williams said the four times security officers used force this year were “unfortunate, yet isolated, incidents in our district.”

“Students have positive relationships with our security staff, teachers and administrators,” she continued. “However, we realize that when these situations do arise, we need to ensure teachers and staff are trained to resolve these conflicts using current best practices in a positive and effective manner.”

Sims-Williams also says the district is reviewing and evaluating its security department to determine proper protocols and equipment requirements.

Roles of security officers at Normandy school include signing people into the building, screening students and visitors through metal detectors and enforcing traffic and parking rules.

A large portion of their job also includes disciplining and managing students, such as monitoring student behavior, checking for hall passes and enforcing conduct rules. Sims-Williams describes them as “peacekeepers” who build relationships with students.

Comparatively, Normandy school resource officers are police officers employed by a police agency and do not play a role in school discipline.

Last year, the Normandy School District spent around $718,000 on salaries and benefits for 13 security officers. There are also six school resource officers at five of the district’s eight schools using a $750,000 grant from the U.S. Department of Justice.

Normandy security officers are expected to participate in monthly in-house professional development sessions and are also offered training by outside organizations and district programs on topics like working with traumatized students, says Sims-Williams.