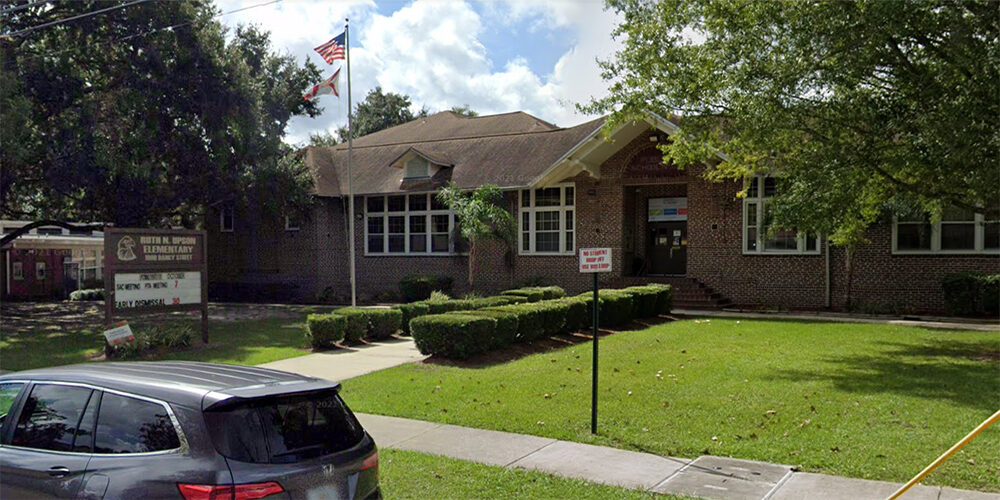 JACKSONVILLE, Fla. — A man wielding an ax attempted to enter a Florida elementary school Friday but left the property when he was unable to gain access.

The incident began around 2:48 p.m. Friday when the man approached Ruth N. Upson Elementary School and tried to enter through two different doors. Duval County Public Schools Police Chief Greg Burton said all doors were locked per district protocol. Someone spotted the man trying to gain access and the school was placed in lockdown.

According to an arrest report, a school employee spoke to the man from a walkway overlooking the sidewalk where he was standing, reports The Charlotte Observer. The employee saw him holding the ax over his shoulder and he said, “You want to be next?”

Superintendent Dr. Diana Greene said when the man left the campus, a school safety assistant followed him a short distance to a nearby church but remained on campus to ensure there was no further threat to the school.

The man then followed two people down the sidewalk and into the church. Those individuals were able to hide in a classroom and the man went back outside. School district police officers pursued and located the man outside the church. The man approached one of the police officers who told him to drop the ax. The man reportedly threatened the officer with the ax and the officer shot him several times.

The suspect, who has been identified as 37-year-old Eric Hurley, is in critical condition. He has been charged with aggravated assault on a law enforcement officer, aggravated assault with a deadly weapon without intent to kill, and trespassing on school property with a firearm or other weapon. Hurley’s bond has been set at $110,009.

Burton said the sheriff’s office is investigating the incident but it is not yet known if the suspect has any mental health problems or if there was a motive.

Parents received a call from the school around 3 p.m. indicating all students and staff were safe but the building was under lockdown and no one would be allowed in or out. A follow-up message sent at 3:41 p.m. indicated all students and staff were still safe and the lockdown would be lifted for dismissal, according to Jacksonville.com. Green sent a third message to parents just before 5 p.m. stating the intruder had been shot by school police.

“While it is troublesome that the event ended in this way, I am very thankful for the professionalism of our staff who took the steps necessary for the safety of the school community,” she said in the message. “If your student exhibits difficulty coping with this trauma, please know that we will have emotional support resources available.”

Greene also said the school’s video surveillance cameras allowed staff to see the intruder trying to get in and call for the lockdown.