School officials explain their approach to National Walkout Day and give some advice for future student protests.

The tragic circumstances that led to National Walkout Day on March 14 make it feel like an outlier, but large student demonstrations aren’t a new or unusual phenomenon. In fact, last week’s protests bore a striking resemblance to the mass student walkouts that occurred during immigration debates in 2006.

Despite that precedence, school officials across the country took vastly different approaches to handling the recent protests. It’s hard to say any of those approaches were right or wrong; as always, school officials must decide what to do based on the unique circumstances of their campuses.

Still, the U.S. Department of Education has published some best practices based on past protests, and we spoke with current school officials to get some lessons they learned from National Walkout Day.

Campuses Should Prepare for Student Protests

School officials should already be working to stay aware of news among the student community. That can be accomplished in informal ways, such as developing relationships with students, or formal ways like investing in a system to monitor social media. 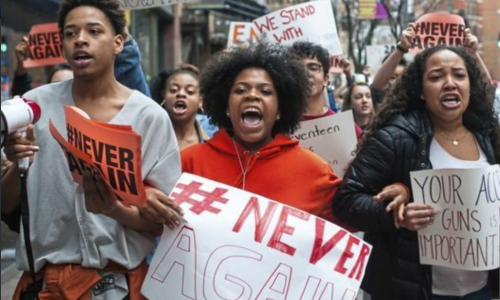 In the case of protests like walkouts, there’s usually quite a bit of student planning ahead of time that can be detected by school officials. National Walkout Day was of course planned in a very public manner, giving school and district officials time to adopt a stance and plan around the protests.

“We had time to get our ducks in a row, dust off our plans, make sure they were up to date, ask some thoughtful questions of the schools,” says Chris Wilderman, the director of safe and sustainable environments for Adams 12 Five Star Schools (referred to as Adams Five Star) in Adams County, Colo. The complete recording of Wilderman’s conversation with Campus Safety is included at the top of this article.

Wilderman’s district-level emergency response team put together a plan based on the National Incident Management System (NIMS) Incident Command System guidelines (a framework developed by the Department of Homeland Security).

Officials at Littleton Public Schools, another district in Colorado, planned for things like counter protesters, members of the media attempting to enter campuses and students from middle and elementary schools attempting to leave school buildings.

“There will be situational issues with any of these events,” the LPS school board cautioned in written guidance to school officials before the event. “Principals will need to be flexible and provide the appropriate response to whatever may be happening in the moment.”

The U.S. Department of Education suggests that officials include the following people in their planning sessions:

The Los Angeles Unified School District (LAUSD) previously found that protests can be mitigated with several strategies (Campus Safety did not speak with district officials about the strategies employed on National Walkout Day).

In the past, LAUSD has implemented the following strategies:

The Days Before the National Walkout

Adams Five Star had the principals at each of its high schools send out messages to families informing them that they had plans in place and had spoken to student leaders about the walkouts.

The night before National Walkout Day, an Adams Five Star student posted on social media that he thought there would be a shooting as students marched, a post that Wilderman says “went viral really quickly.” Authorities identified and spoke with the student and determined it was a general statement and not a credible threat.

“That [message] spread like wildfire,” Wilderman says. “As a result of that we sent a letter to parents… but that was mostly out of our control. Social media is just one of those things you have to contend with.”

One response to “Lessons Learned From National Walkout Day”