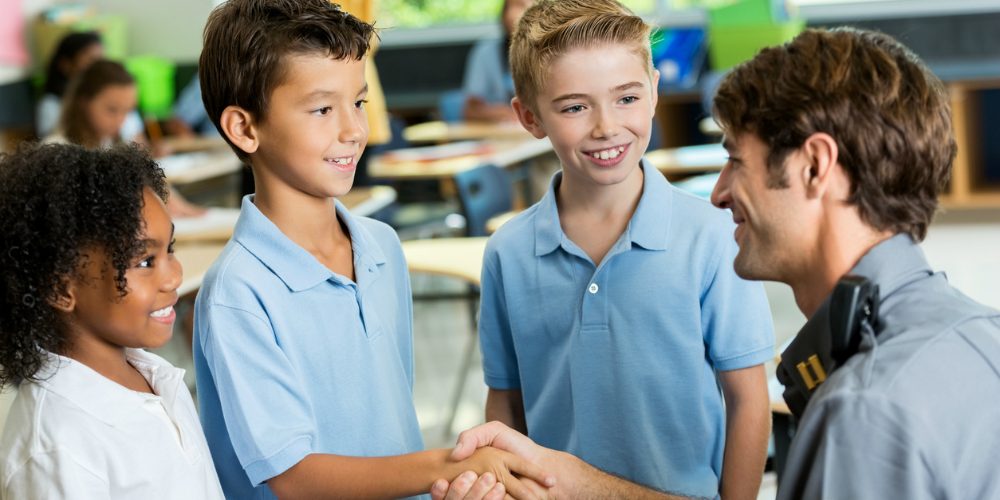 Police officers stationed in schools should want to work with students and receive proper training.

As school districts around the country scramble to hire school security officers, the success of these initiatives will hinge on officials’ ability to get the officer selection process right.

“There’s certainly a tendency to rush into this, and I can understand why, but the selection process is incredibly important,” says Mo Canady, the executive director of the National Association of School Resource Officers. “Schools need to be careful about moving too quickly on this.”

Unfortunately, there are already signs that people are underestimating the importance of properly selecting and training school security officers.

The law requires every school to have a “safe school officer” on campus by partnering with local law enforcement agencies. These officers must:

The details above sound great coming out of politician’s mouths, but when you get deeper into the details you realize how difficult it will be to implement this mandate effectively.

Florida Governor Rick Scott has said he expects at least one school security officer at each school by the beginning of the 2018-2019 school year. There are approximately 4,200 public schools in Florida, and the most recent data shows approximately 1,500 law enforcement officers worked in schools in the state prior to the Parkland shooting.

That means Florida school district officials have one summer to hire over 2,000 officers!

Florida has dedicated $97.5 million to help schools meet this requirement, and officer salaries may be split between the district and local law enforcement agencies, but throwing money at the program doesn’t mean these officers will be adequately prepared to work in a school setting so soon (and there’s already signs there may not be enough money to go around).

“You have to have a sincere desire to work with students [to be an SRO], and not everyone has that,” Canady explains. “You either have it or you don’t, but it’s difficult to develop.”

Canady believes officers aspiring to work in school environments should spend time learning about adolescent development and social media use among teens. He also suggests they spend time volunteering with adolescents through things like sporting leagues, religious groups and the boy scouts.

“They need specific training on how to work in school,” Canady says. “They should also go through at least a 40 hour SRO course to be prepared to work in a school environment. And training should be ongoing— at least annually, if not more often.”

Canady, while not specifically referring to Florida’s situation, estimates the process of hiring 1,000 school resource officers should take 12 to 18 months.

“You have to understand we’re struggling to get quality candidates just for law enforcement positions in general right now,” Canady says.

Emotions are understandably high in Florida, and politicians are trained to react quickly to issues getting attention from the media and public.

But we’ve seen the consequences of putting inadequately trained officers in schools. These decisions need to be made carefully and with best practices in mind.

Other areas can learn from the strengths and weaknesses of Florida’s new law. School security has everyone’s attention, let’s make sure we use this moment to make the greatest possible impact on the safety of our schools.

One response to “In Rush to Add School Security Officers, Don’t Lose Sight of Best Practices”