A 26-year-old female was stabbed in the back of the neck by a 17-year-old male, both of whom were patients in the hospital’s mental health unit.

The alleged assailant was out on a day pass when the assault occurred.

Windsor Regional Hospital officials say necessary security changes will be made after a patient was stabbed on Saturday.

Hospital CEO David Musyj says although changes will be made following the stabbing, security measures are constantly being reviewed at the Ontario hospital, reports CTV.

“Definitely, there will be changes,” says Musyj. “You’ve got to learn from these things. Thank God, it could have been a lot worse.”

On the evening of August 19, a 26-year-old female patient was stabbed in the back of the neck near an elevator bank in one of the hospital lobbies. Her injuries are said to be non-life threatening, according to Blackburn News.

The suspect, a 17-year-old male, is now facing one count of aggravated assault. Police say the victim and the suspect do not know each other.

Musyj says the suspect was a patient in the mental health unit who had just returned to the hospital less than an hour before the stabbing occurred. He had been permitted to leave the hospital on a day pass with his father.

The victim was also a patient in the mental health unit and was going outside with her grandmother to smoke a cigarette, reports OurWindsor.ca.

One change Musyj says the hospital will make is in how it handles the return of patients who receive a day pass.

Currently, returning patients are searched by security once they enter the floor of the mental health department. He says the hospital will now look at searching patients at an earlier stage of their arrival.

Musyj defended the hospital’s day pass policy, saying it is vital in helping mental health patients reintegrate into society and spend time with their families. The suspect had previously received six day passes with no incidents.

However, according to Doctor Raj Basker, chief of mental health services at Windsor, says the suspect had a history of “acting out”, but those incidents involved damage to property, verbal aggression and self-harm.

Musyj ensures that the hospital does not “wait for an event to occur to make changes”. He referenced that earlier this year the hospital started administering random checks with sniffer dogs and says other random security checks are conducted in the mental health unit.

Musyj says the hospital is also considering metal detectors, which are extremely rare in Canadian hospitals.

The victim’s father says his daughter will likely never return to the mental health unit because of his dissatisfaction in the hospital’s security precautions.

Wilfred Lucier says he hasn’t left the hospital since his daughter was stabbed. He is especially angered that he had to find out about his daughter’s emergency surgery through a family member and not the hospital.

“She has a tube draining blood through her lungs,” Lucier told CBC News. “If security can’t protect her, I have to stay here to make sure she’s okay.”

Lucier says he fears for the well-being of everyone in the hospital and his daughter will not feel safe until the hospital implements a stronger screening process for mental health patients re-entering the building.

He is currently considering legal action and plans to move his daughter to a different hospital once she has recovered. 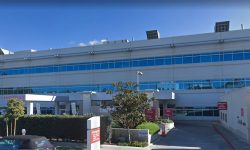