A code silver was issued and the hospital was locked down after an employee informed administration of a man in the employee parking lot with a rifle.

After gaining access, the suspect pointed the gun at several employees but did not shoot.

Staffers at Bakersfield Heart Hospital in Bakersfield, Calif., are being praised for their quick response after a gunman shot through a glass door with a rifle.

Surveillance video shows the suspect, 44-year-old Brandon Clark, waiting outside an employee entrance for about eight minutes. Clark then shoots through a door and pushes through the broken glass to enter the hospital.

Clark walked the halls of the hospital for three minutes where he pointed the rifle at several employees but did not shoot. He then exited through the same doors he entered, according to Kern Golden Empire.

Clark was shot by responding Bakersfield officers in the employee parking lot and is currently listed in critical condition. The two officers involved in the shooting have been placed on administrative leave pending an investigation. 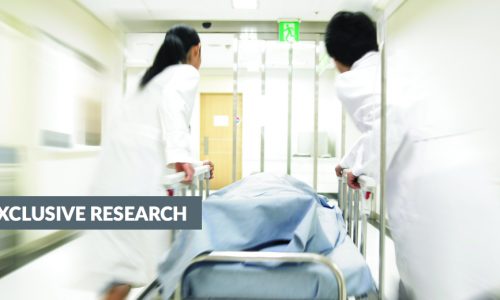 Clark will face several assault and firearm-related charges upon release from the hospital.

Witnesses say Clark told people he was not there to shoot them. A motive is still being determined but investigators believe Clark may have been under the influence of narcotics, reports Bakersfield Now.

“Brandon has the biggest heart of anyone I know. He must have been very sick to do this. I know his motives were not malevolent,” his family wrote in a statement.

Bakersfield police say Clark is related to an employee at the hospital but the employee was not there and had no recent contact with him prior to the incident. The relative is not believed to have been a target of the suspect, according to ABC 23.

Before Clark entered the building, a hospital housekeeper, identified only as Ashley, and an unidentified security guard spoke to Clark in the parking lot. Hospital CEO Michelle Oxford says they noticed a gun hanging from Clark’s side. Ashley immediately went to Oxford’s office to inform her of the situation.

Within seconds, Oxford issued a code silver, a person with a weapon, and the hospital was placed on lockdown. Surveillance video shows nurses moving patients into secured rooms and visitors running out of a waiting room towards the front entrance of the hospital.

It was ten minutes after the lockdown had been issued that Clark shot through the glass door.

Oxford says her staff goes through active shooter training twice a year and used their training “perfectly” in this situation.

“The staff put themselves above any type of harm that could be caused to make sure that patients and families were taken care of and that’s what we have trained them to do,” says Oxford.

After police shot Clark, he was brought back into the hospital to be treated.

“Even though he was the gunman, he now became a patient and our role is to take care of patients non-judgmentally and that’s what we did,” says Cunanan. “He needed our help and we were going to help him.”

Clark was treated for approximately three minutes before being transported to Kern Medical.

“I write a Friday message to my staff every Friday and I end it with ‘take care of yourself and each other’ and they certainly did that.”