The school's Fire and Life Safety and Public Safety departments hosted a seminar on October 20 to discuss the changes.

Following devastating wildfires and the active threat of an earthquake in California and the tragic mass shooting in Las Vegas, Chapman University in Orange County, Calif., is in the midst of making significant changes to its emergency plans.

While wildfire and earthquake protocols have been slightly revised, the most significant changes have focused on active shooter situations.

David Sundby, director of residence life and first year experience, says the school is currently “revisiting and revising” its active shooter preparedness, according to The Panther.

“In wake of the Las Vegas attacks, we are working with Public Safety to identify potential sniper risk locations on campus,” says Sundby. “Through that, we can further what we can do to inform students of safety resources.”

Chapman’s revised emergency plans include the implementation of a system which identifies how intensely an emergency could affect the campus and its surrounding communities, who officials should work with to handle the emergency, and how to alert students or community members.

An October 9 brush fire in Anaheim Hills was categorized as a “Limited Impact, Community” situation, which means it could affect both students and Orange County residents. When labeled as such, school officials will work with local authorities in order to direct students to resources they may need, such as county-provided evacuation centers, if the fire affected a community which they have ties to.

An example of a “Large Impact, Community” emergency, says Sundby, is a severe earthquake. In these situations, students are sent alerts regarding the emergency and available resources.

The school uses an emergency alert system called Panther Alerts, which informs both students and staff of emergencies via text message, phone calls and emails.

A “Large Impact, Chapman” emergency would be a gas explosion or water main break on campus that causes significant damage.

Mark Davis, manager of the Fire and Life Safety Department, says the information provided at the event is applicable to emergencies other than active shooters, although it was the main focus.

“This information can be used in cases such as a fire or earthquake, and we cannot be under the impression that an emergency could never happen here,” says Davis.

If an active shooter scenario were to occur on the campus, the school’s Public Safety department would have to rely on the Orange Police Department since school officers are not armed.

“The Orange Police Department would be dispatched to campus, and would be met by Public Safety officers who would give them plans of every building, master keys and access cards to reach all areas,” says Davis. “Time is so relevant, and officials will need to act quickly.”

Davis says Chapman students are advised to “run, hide and fight” in the case of an active shooter.

The survey was conducted prior to the Las Vegas shooting. The survey’s researchers say the fears of a random mass shooting would have spiked if conducted after the deadliest mass shooting in modern U.S. history, according to Smithsonian.com.

Although wildfires have been ravaging the state of California, Sundby says not many changes will be made to Chapman’s wildfire protocol since wildfires can be subjective and often change course quickly.

If students had to be evacuated, the school would work with state officials and the Orange community to relocate students.

The task of relocating students lies on the shoulders of the school’s Residence Life Department, which Sundby says is an extremely difficult task.

“Moving students, as well as keeping them and their parents informed, can be challenging. We do our best to answer phone calls and respond to emails, but we recommend that students think about what they would do in the event of an emergency.”

The 2017 climate survey, which was the school’s fourth annual, also found that several environmental fears made the top ten on the list. Researchers say environmental factors have “never cracked the top ten fears in our previous surveys”, reports the Washington Post. Some of those fears include pollution (both air and water), global warming and climate change. 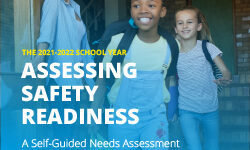