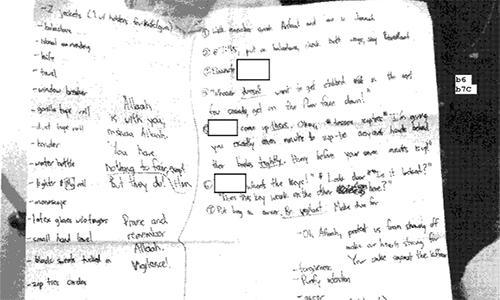 A screenshot from the attacker's manifesto.

Last month, the FBI released the written attack plan of a University of California (UC) Merced student who was fatally shot by campus police after stabbing four people.

On Nov. 4, 2015, 18-year-old Faisal Mohammad used a 10-inch knife he bought online to stab two students, a UC employee, and a contract worker before being fatally shot by a UC Merced police officer. An investigation determined the officer’s use of deadly force was justified.

The document also provides additional insight into the events leading up to the attack. Mohammad’s family previously filed a restraining order against the release of the manifesto and the photo of an Isil flag that was found in his possession, reports The Merced Sun-Star.

The document includes a 31-step plan, handwritten by Mohammad and also found on his person, about how he planned to carry out the attack. He was planning to start his attack by saying “Bismillah,” which means “In the name of Allah.”

Mohammad planned to enter a classroom and order someone to zip-tie his victims’ hands behind their backs within seven minutes. He then planned to hang up the photo of the flag, tape his victims’ mouths, and yell “Praise Allah” while slitting their throats.

Mohammad then planned to call the police and say there was a “guy inside acting crazy” who wanted to kill himself. The written plan ended with him reading the Quran “until you hear sirens.” Once police arrived, he planned to take cover, draw a gun, and “peek (his) head over, take calm shot after shot.”

After the incident, Merced County Sheriff Vern Warnke said he didn’t believe Mohammad had the ability to fully carry out his plan and that the attack was not motivated by religion or terrorism. Warnke believes Mohammad was motivated by anger over being excluded from a study group. Witnesses of the attack described Mohammad as troubled and angry with classmates.

However, the FBI later concluded Mohammad was inspired to commit the attack by the Islamic State of Iraq and the Levant (ISIS), and that the attack was an act of lone-wolf terrorism, according to Fox 26 News.