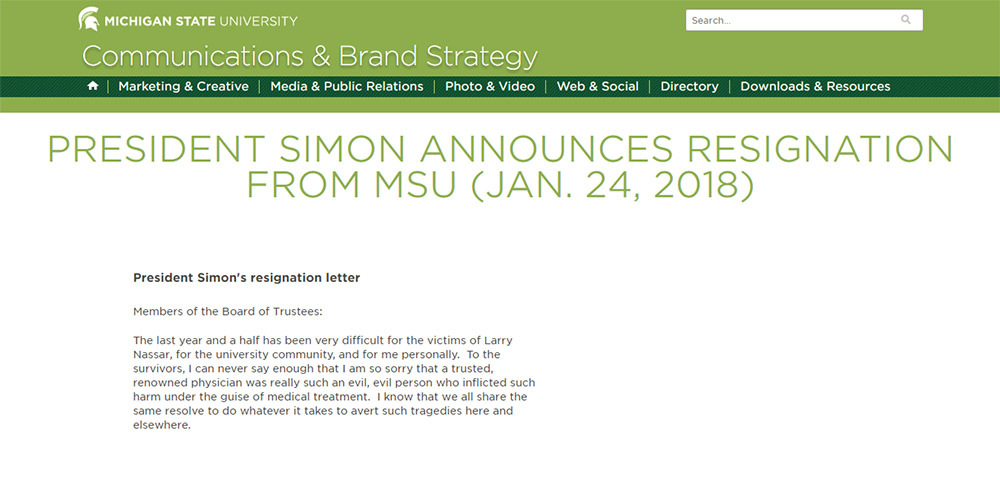 The NCAA is currently investigation MSU's handling of the reported sexual abuse.

Michigan State University president Lou Anna Simon announced her resignation on Wednesday, just hours after disgraced former doctor Larry Nassar was sentenced to up to 175 years in prison for the sexual abuse of athletes he treated during his long-standing career.

Simon posted her resignation letter on the MSU website after numerous calls for her removal or resignation following the Nassar scandal.

“The last year and a half has been very difficult for the victims of Larry Nassar, for the university community, and for me personally,” begins the letter. “To the survivors, I can never say enough that I am so sorry that a trusted, renowned physician was really such an evil, evil person who inflicted such harm under the guise of medical treatment.  I know that we all share the same resolve to do whatever it takes to avert such tragedies here and elsewhere.”

MSU Board of Trustees responded to her announcement, praising her for work she had done in her 40 years at MSU but also agreeing it is “time for change”.

Simon had previously come under fire for what critics say is the mishandling of the Nassar scandal, indicating she, among other school leaders, need to be held accountable for what happened while Nassar was employed as a sports physician at MSU from 1997 to 2016.

Legislative leaders are among those who called for Simon’s resignation, urging the board to “act swiftly” to remove Simon.

“I am glad Lou Anna Simon finally did the right thing. The university’s response to this crisis simply hasn’t been good enough, and I hope that changes going forward for the sake of both the victims and the entire Michigan State University community,” Speaker of the House Tom Leonard said in response to Simon’s resignation.

The school maintains no officials knew Nassar had sexually assaulted patients until newspapers started reporting on the allegations in the summer of 2016. An MSU statement from last week says any suggestion that the university was part of a cover-up is “simply false”, according to CNN.

The first alleged report of abuse by Nassar was in 1997 by Larissa Boyce, a member of the MSU gymnastics team. Boyce says then-head gymnastics coach Kathie Klages discouraged her from reporting Nassar, indicating she must be “misunderstanding what is going on” and that there would be “serious consequences” for reporting him.

Dozens of Victims Recount Abuse Prior to Nassar Sentencing

Larry Nassar had pleaded guilty to seven counts of criminal sexual conduct. He admitted to using his trusted medical position to assault and molest girls under the guise of medical treatment.

Before his sentencing, 156 victims read impact statements over seven days, recounting how the former USAG and MSU doctor sexually abused them. Many discussed how their own parents did not believe they were sexually assaulted by Nassar because he was a world-renowned doctor who was trusted by many.

Nassar was already sentenced to 60 years in prison on child pornography charges. There are also 150 civil lawsuits currently filed against him.

Nassar also pleaded guilty to three charges of criminal sexual conduct and is expected to be sentenced on those charges on January 31.

On Tuesday, the NCAA announced it is investigating Michigan State’s handling of the allegations, indicating it will look into whether the school violated any rules.

“The NCAA has sent a letter of inquiry to Michigan State University regarding potential NCAA rules violations related to the assaults Larry Nassar perpetrated against girls and young women, including some student-athletes at Michigan State,” the NCAA said.

Jason Cody, a spokesman for Michigan State, says the university is reviewing the letter.