Two-way radio, phone, emergency notification and video surveillance systems will all be upgraded.

Campuses in Clary, Greene and Logan counties will receive the upgrades.

SPRINGFIELD, Ohio—Clark State Community College will soon be implementing more than $300,000 in security upgrades at its campuses across the Miami Valley.

On May 22, the Ohio Controlling Board approved nearly a nearly $340,000 request for improvements from Clark State, reports the Springfield News-Sun.

The upgrades will include new hand-held radios, security cameras and phone system software that will enable police dispatchers to identify the specific addresses of 9-1-1 callers. Currently, when someone calls 9-1-1, dispatchers can only see a general address.

The new two-way radios will enable campus response teams to communicate with local first responders, including police, fire and EMS. Additionally, notification beacons will be mounted on the walls.

The security cameras will monitor every entrance and area of money exchange. Currently, Clark State doesn’t have any video surveillance installed.

Campuses in Clary, Greene and Logan counties will receive the upgrades. 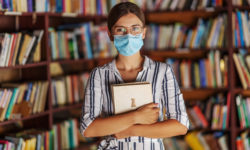