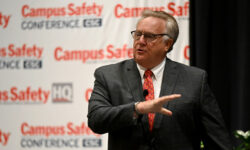 Here’s how Motorola’s two-way radios can improve school and university communications with first responders during a emergency.

Check out some of this Memorial Healthcare director of public safety’s top accomplishments, as well as a photo gallery of him and his department.

Spotlight on Director of the Year Finalist Donald Charley

‘It’s On Us’ to Prevent Sexual Assault

Top celebrities take the pledge to be part of the solution to stop sexual assault in this public service announcement.

Emergency notification is one of the biggest benefits and a major factor in ROI. A digital signage pro talks about choosing displays and creating content.

A emergency video produced by a partnership of Alberta post-secondary institutions outlines what to do in the event of an active shooter attack.