Israeli schoolchildren playing soccer inside a fenced in area under the watchful eyes of teachers and an armed guard just out of the view of this camera.

The mere fact you are reading this magazine means you and I share a bond… a bond to try and protect the schools, colleges and hospital campuses of this nation. Bearing that thought in mind, I’m certain the Newtown, Conn., mass shooting in December that shocked our nation’s conscience shocked yours as well and once again strengthened your personal resolve to be the best that you can be in keeping your people and facilities safe.

With this in mind, at the beginning of this year, I wanted to learn from the best of the best. I wanted to go to Israel. I’d applied to go the year before and had been accepted, yet funding shortages kept me home. In January, however, I was ecstatic to learn that I would be going for two weeks in May and June as a member of the 2013 Georgia International Law Enforcement Exchange (GILEE). GILEE is a project of Georgia State University (GSU) in Atlanta and is the brainchild of Dr. Robert Friedmann; professor emeritus of criminal justice at GSU.

There are a lot of ideas in the United States of what Israel is like. For example, I’d always heard that Israel is an armed society, and virtually everyone routinely carries a weapon. I learned quickly from one of our guides that although the private ownership of firearms in Israel is not forbidden, those not employed in public safety, security or in the military must show a legitimate need to possess a firearm and must have a permit. Examples include being a civilian, yet being a target of a specific credible threat, such as a retired member of the Israel Defense Force (IDF) or police officer, or a person serving as a reservist. With 20% of Israel’s budget going to defense and security, and 80% of the nation’s defense force being reservists, one can comfortably calculate that a significant portion of the public owns a firearm but don’t routinely carry one.

I also thought that there were fences between the Jewish population and Arabs who are mainly of the Muslim faith. I learned quickly that Israel, much like the United States, is a melting pot. Jews, Muslims, along with Christians, Baha’is, Druze and secular Israelis live and work side by side in this country of 7.7 million people. This country, from a standpoint of geography, could fit inside my home state of Georgia, without ever touching the borders. With the exception of the Mediterranean Sea, Israel is bordered on all sides by neighbors that are not generally friendly: Syria, Egypt, Jordan and Lebanon. 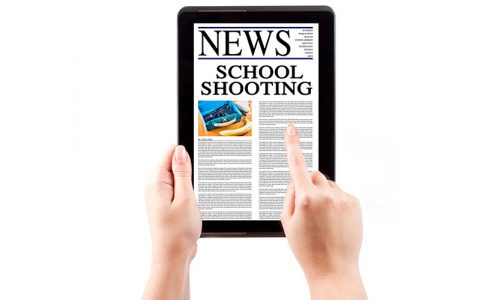 One of the keys in the Israeli approach is proper mindset (see Behavioral Profiling Is Useful When Appropriately Applied). Although responding to and dealing with the threats to public safety and security are the responsibilities of the police, determining who and what potentially constitutes a threat is taken very seriously by every Israeli citizen. They have learned to live in a culture where threats come in the form of unprovoked and unpredicted rocket attacks at any hour, or someone detonating a suicide vest in a crowded restaurant. The suicide bomber can come in the form of a man, woman or even the unthinkable, a child.

As we travelled the streets of Tel-Aviv, my mind turned to stories I’d heard of how there are soldiers securing every school and school bus in Israel. I quickly learned after observing a school from the street and making inquiries of our police escort that this was not the case. It is correct that they do indeed have armed security in every school and that an officer is very visible. All the security officers working in the schools are under the guidance of the Israel police, and the standards are high. Unannounced drills are frequent to test operational readiness.

Regarding school buses, there is no such thing in Israel. Any child not walking or being taken to school rides on public transportation. Now, very often there is an armed IDF soldier on the bus, yet this is happenstance and not by design. When there is a heavily attended school field trip, contracted IDF soldiers, police or armed security officers provide the escort for the group.

Compulsory military service for Israelis (male and female) is mandatory at age 18. Service is three years for men and two years for women. Orthodox Jews, Arabs and those who a have serious chronic medical condition are exempt. That said, you see quite a few young people walking about Israel and on public transportation with fully automatic carbine rifles, ready to load and fire in an instant, but they are generally IDF soldiers. National pride abounds in Israel, and one factor is that most citizens have been soldiers at some point in their lives.

One Israeli civilian told me that when he had children in school during the height of the suicide bombings, he would make the three children ride to school in separate buses. He said that although this was heartbreaking, he felt he needed to do so in order to have some comfort if something happened. He said that mathematically at least, he could perhaps avert tragedy with one of his children.

“This is the reality of life in Israel,” he said matter-of-factly.

The Israel schools have assessed the threats and acted accordingly to address them. They have heavy fencing around them to prevent suicide bombers from entering their grounds and buildings, and fences are erected high enough so that anyone trying to lob some explosive device over the top would have a hard time accomplishing the act.

The Israeli “SRO” does not handle law enforcement functions as do many of us within our country. Their function is solely a preventive counter-terror measure to deter, engage if necessary and neutralize a threat.

By all accounts that I received, issues with Israeli school children committing acts that are considered crimes are very rare. Even when this does occur, these events are handled by the school’s headmaster. This is a considerable difference between our style and theirs because as much as we don’t enjoy saying it, American kids can and do commit criminal acts on campus that are sometimes horrendous. This is an unfortunate fact that we face daily as campus police or armed security in our schools. This is life in the United States.

Incorporate These 8 Steps into Your Plan

I gained a priceless new mindset after my trip to Israel. Want to think like an Israeli security specialist? Not to simplify their expertise — because it is amazing — the proper mindset really is not all that difficult. Yet, it is what sets them apart. Rather than thinking that arms alone will defeat any threat, mindset is more important than firepower. This mindset is best kept simple, and I suggest the following:

1) Identify the most likely threats to your students and staff.

2) Solicit the help and active collaboration of stakeholders and form all-hazard threat assessment teams to identify the threats and methods to warn your staff and others about the threats that can be prevented or interrupted. This is provided that they can be mitigated. For example, foul weather cannot be prevented, but it can be mitigated. Concentrate on preparedness for the most likely threats, and use resources that are readily available as guides such as FEMA, the Department of Education, reputable private firms, non-profits and your state’s emergency management.

3) Have a no-hassle and confidential way for the reporting of unusual/concerning activi
ty (e.g. an unattended bag). Any system/method you employ for public reporting should be very user friendly.

4) Develop and communicate as simple of a plan as possible to staff or students on the proper course of action they should take to deal quickly with threats.

5) Train, train, train on that plan, and include students and staff, not just your own public safety staff. Then, evaluate the plan and tweak it where necessary. Also, ensure that safety drill practices and evaluations are a weighted part of staff performance expectations.

6) If you use security cameras and technology, get a vendor with good support and don’t bog down people trying to monitor technology that is beyond their ability to mentally handle. The Israelis were quick to point out that they limit anyone monitoring video to a four hour shift. Anything beyond that greatly decreases human capability to observe.

7) As much as possible, sanitize areas that are to be used for large gatherings on campus. You might not have a K-9 or sophisticated explosive detection equipment on hand, but you can have trained observers. Train them on IED detection and use them. Once you sanitize an area, ensure it is secured and not left unattended before participants begin to arrive.

8) Use community policing to make safety a mindset and culture on your campus so the programs you employ will be sustainable in the future. Soliciting others on campus is a force multiplier, so get students and staff involved. Properly applied technology is a great asset, yet nothing really beats an engaged observer who is properly trained on response.

Rod Ellis is a 26 year law enforcement veteran and police instructor and serves as the Chief of Police of the Glynn County School District in Brunswick, Ga. He can be reached at [email protected]