Verizon says its new private network will complement existing services such as push-to-talk and will offer priority access to first responders.

Verizon says its decision to create a network comes at the request of public safety agencies.

Verizon will build a dedicated network core for first responders, advancing its efforts in the public safety sector and setting the stage to compete with First Responder Network Authority (FirstNet) contractor AT&T.

Verizon announced last week it will build and operate its own private network core for public safety communications and will offer priority access and preemption to first responders for free whenever necessary.

The carrier says it will invest in new “mission-critical 4G LTE voice communications” that will complement existing offerings like Push-to-Talk Plus.

Verizon indicated the move comes at the behest of public safety agencies.

“We’re making the investments necessary to give public safety access to the best possible network coverage, reliability, and capability, when and where they need it,” says Verizon’s Public Sector SVP Michael Maiorana. “Our public safety network will provide a comprehensive and cost-effective solution for public safety, and we’ll continue working to offer first responders the network reliability and access to innovative services they need to keep our communities safe.”

Verizon stressed it considers the network core solution to be a complement to FirstNet rather than an alternative, noting that it will simply give first responders an additional choice. Use of the carrier’s network solution won’t require states to opt-out of AT&T’s FirstNet build, and Verizon said it’s planning to fund the project itself.

Still, the move appears to be setting up a fight between Verizon and AT&T for public safety users since Verizon indicated it will offer multi-band devices that provide Band 14 access and enable full interoperability with Band 14 radio access networks deployed by FirstNet.

As Wireless Week reported last week, Verizon said in a recent filing with the FCC that it plans to “provide reliable and innovative public safety communications services to state and local governments irrespective of whether states choose to opt out of the FirstNet network.” And in recent months, the carrier has launched a campaign highlighting its work with public safety officials across the country to draw in customers.

In July, Verizon said it was lending communications support to more than 8,000 firefighters and first responders battling fires in several western U.S. states. In particular, Verizon noted its use of satellite communications technology in remote areas of California, Cell-on-Wheels deployments in Utah, and network repeaters in Arizona. 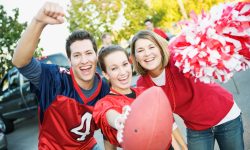