The video above shows a demonstration of the new technique.

The first technique to detect a drone camera illicitly capturing video was revealed in a new study published by Ben-Gurion University of the Negev (BGU) and Weizmann Institute of Science cybersecurity researchers.

The study addresses increasing concerns about the proliferation of drone use for personal and business applications and how it is impinging on privacy and safety.

In a new paper, “Game of Drones – Detecting Captured Target from an Encrypted Video Stream,” the researchers demonstrate techniques for detecting if a targeted subject or house is being recorded by a drone camera.

“The beauty of this research is that someone using only a laptop and an object that flickers can detect if someone is using a drone to spy on them,” says Ben Nassi, a Ph.D. student in the BGU Department of Software and Information Systems Engineering and a researcher at the BGU Cyber Security Research Center (CSRC). “While it has been possible to detect a drone, now someone can also tell if it is recording a video of your location or something else.”

In the first demo, researchers show how a privacy invasion against a house can be detected. They used smart film placed on a window and entered a few software commands on a laptop to access the encrypted video the drone operator sees, called the FPV channel.

This enabled the researchers to demonstrate how they detect that a neighbor is using a DJI Mavic drone to capture images of his own home and then illicitly stream video of his neighbor’s house, as well. (The video demonstration is included below).

In a second outdoor test, researchers demonstrate how an LED strip attached to a person wearing a white shirt can be used to detect targeted drone activity. When researchers flickered the LED lights on the cyber-shirt, it caused the FPV channel to send an “SOS” by modulating changes in data sent by the flickering lights.

“This research shatters the commonly held belief that using encryption to secure the FPV channel prevents someone from knowing they are being tracked,” Nassi says. “The secret behind our method is to force controlled physical changes to the captured target that influence the bitrate (data) transmitted on the FPV channel.”

This method can be used on any laptop that runs Linux OS and does not require any sophisticated hacking or cryptographic breaking skills.

“Our findings may help thwart privacy invasion attacks that are becoming more common with increasing drone use,” Nassi says. “This could have significant impact for the military and for consumers because a victim can now legally prove that a neighbor was invading their privacy.”

In previous research, Nassi showed how a laser mounted to a DJI Inspire 1 drone can use malware installed on an isolated (air-gapped) network scanner. Click here to watch a video of that demonstration.

The research team also included Raz Ben-Netanel, a student in the BGU Department of Communication Systems Engineering, and Prof. Yuval Elovici, director of the BGU Cyber Security Research Center. Prof. Elovici is also a member of Ben-Gurion University’s Department of Software and Information Systems Engineering and director of Deutsche Telekom Laboratories at BGU. Prof. Adi Shamir from the Weizmann Institute of Science conceived the Game of Dronestechnique. 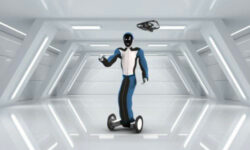