How to Effectively Respond to Active Shooters in Healthcare Facilities 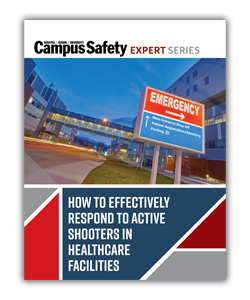 Active shooter incidents have been on the rise throughout the United States. Recent FBI data has identified 250 active shooter incidents between 2000 and 2017, in which 799 people were killed and an additional 1,418 were wounded. In the first half of that period, there was an average of 6.7 incidents per year. That number has tripled to over 20 incidents per year in the second half of that period. Four percent (10) were in healthcare organizations.

Additionally, the Annals of Emergency Medicine published a 2012 study that examined all U.S. hospital shootings between 2000 and 2011 in which there was at least one injured victim. It identified 154 incidents in 40 states causing death or injury to a staggering 235 people. Active shooter events at healthcare facilities are different from schools, shopping malls and commercial businesses for several important reasons:

Please fill out the form below to receive your download.